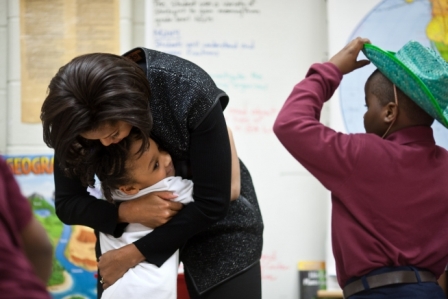 WASHINGTON (AP) -- From the beginning, Michelle Obama's kitchen garden has been an overachiever, churning out more peppers, parsley and eggplant than expected, and generating interest that - yes, really - crosses oceans.

Now, the first lady has added a 271-page book to her gardening resume, and Americans can read all about the planting misses that came with the hits, get tips on gardening at home, and, Mrs. Obama hopes, draw some inspiration that just might change their lives. Oh, and if it happens to help her husband's re-election campaign, that would be nice, too.

Lofty goals for a book about a garden.

In "American Grown: The Story of the White House Kitchen Garden and Gardens Across America," Mrs. Obama holds out the raised vegetable beds on the South Lawn as "an expression of my hopes" for the nation's children. "Just as each seed we plant has the potential to become something extraordinary, so does every child," she writes.

The $30 book, released Tuesday by Crown Publishers, traces how a city kid from the South Side of Chicago who became a working mother and then a political spouse found herself fretting on that first planting day, March 20, 2009, about whether an L-shaped stretch of soil would prove fertile ground for a national conversation "about the food we eat, the lives we lead, and how all of that affects our children."

The book, which answers that question with a resounding yes, arrives just in time for her husband's re-election campaign.

And while the book is decidedly non-political, that fits perfectly with the Obama campaign's view that the first lady can do her husband a world of good simply by pushing the non-threatening causes such as healthy living that have made her a far more popular figure than the president himself. Mrs. Obama's favorability rating in the latest AP-GfK poll was 70 percent, compared with 58 percent for her husband.

The book's release comes with a flurry of media appearances. She's already been a TV frequent flyer to promote her "Let's Move" campaign to combat childhood obesity - doing pushups with Ellen DeGeneres, playing tug-of-war with Jimmy Fallon in the White House and serving veggie pizza to Jay Leno. She says she gets asked about the garden wherever she goes, around the world.

"It turned out exactly as I envisioned. It's a beautiful book, wonderful pictures," she said in an appearance Tuesday on ABC's "Good Morning America."

"It is definitely a passion. Getting the kids in our country to eat healthy," Obama added. "This book is a way to talk about our journey" to better health, she said.

The first lady said that her "Let's Move" campaign to improve fitness, particularly for young people, isn't an attempt to tell people how to live. "That's not really what `Let's Move' has been about," she said. "This isn't about government telling people what to do."

The book is chock full of colorful, glossy photos of luscious-looking vegetables, complete with a cover picture in which the first lady's blouse seems to be color-coordinated with the eggplants in her bulging basket of produce. Bo, the popular family dog, gets plenty of cameo appearances. There are maps tracing the growth of the garden over the past three years, and stories about community gardens around the country. Even a how-to on creating a compost bin.

The book is divided into four sections marking the seasons, and includes a complement of recipes for each.

There are inside stories about planting travails that will ring true with any weekend gardener: pumpkins that wouldn't grow, cantaloupes that tasted blah, blackberry bushes that wouldn't play nice with the raspberry bushes and an invasion of cucumber beetles, among them. The first lady makes clear she's not the one doing most of the hoeing and weeding, crediting school kids, White House chefs and grounds crew and enthusiastic volunteers from all over the White House chain of command with providing lots of manpower.

And there are bits of historical trivia woven throughout: John Adams ordered up the first White House garden, but it was never harvested after he lost re-election. Thomas Jefferson was obsessed with trying to grow a four-foot-long cucumber. Heiress Rachel "Bunny" Mellon, at 101 now a figure in the John Edwards' corruption trial, helped redesign the Rose Garden for President John Kennedy.

There are also bits of personal history: Mrs. Obama's father worked as a boy on one of the vegetable trucks that would deliver produce to neighborhoods, and had a reputation for sneaking pieces of fruit. Her mother's family had a plot in a neighborhood victory garden on the corner of an alley, and the kids had to eat their vegetables or go to bed without supper.

It is a tradition for first ladies to use books to advance their causes. Hillary Clinton wrote the best-seller "It Takes a Village," about the importance of community in raising children; and Laura Bush collaborated with daughter Jenna on a picture book about a reluctant reader, with "Read All About It!"

This is Michelle Obama's first book. She got no advance payment, and plans to donate all her proceeds to the National Park Foundation for programs that promote gardening and healthy eating, and to help care for the White House garden.