One in Three Is Obese - Even the Homeless 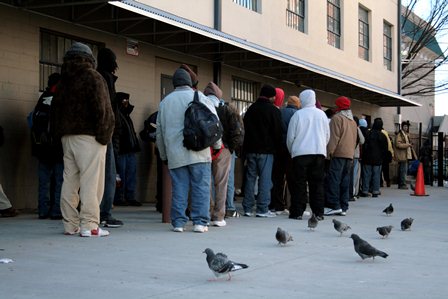 (CNN) -- Obesity is a widespread epidemic, even among the homeless.

While the popularized image of a homeless individual is one of skin and bones, a new study shows the reality is not so. One in three (32.3%) homeless individuals in the United States is obese, highlighting a hunger-obesity paradox.

The paradox is that hunger and obesity can exist in the same person. And although a person may be overweight or obese, he or she can lack proper nutrition.

Nutrition is a daily challenge for homeless people, as the foods they manage to get are often full of preservatives and high in sodium, fats and sugars. They may not have access to healthier options like fresh fruits and vegetables.

"It's the lowest socio-economic group who has the biggest obesity problem," said Paul Montgomery, one of the authors of the study published in the Journal of Urban Health. "No one looked at the homeless problem before. What we found was this group has a significant obesity problem that wasn't known."

The obesity rate in a sample of 5,632 homeless adults seen at the Boston Health Care for the Homeless Program was similar to that seen in the general population.

"It just mirrors what Americans look like in general," said Barbara Dipietro, policy director of the National Health Care for the Homeless Council. "It follows the homeless in general. They are more economically driven. They are intact families and people who are coming into homelessness, who don't come with behavioral health issues. When we look at the homeless population, we think they're different, but they're like everyone else."

Two out of three homeless individuals were either overweight or obese. The study found that 32.6% were normal weight and that 1.6% was underweight.

"Although underweight has been traditionally associated with homelessness, this study suggests that obesity may have replaced underweight as the new malnutrition of the homeless," the authors wrote.

The researchers found that 5.6% of this population were morbidly obese, meaning they had BMIs greater than 40. A 250-pound man who stands at 5 feet and 7 inches would have a BMI of 40. A BMI over 25 is considered overweight; a BMI over 30 is obese.

"Our results are in line with [the] hunger-obesity paradox," said Montgomery. "People feel hungry. The body's response is the higher calories, you store them and become obese, and you still feel hungry. It's a circular problem."

The human body might be hoarding calories, as an adaptive response when people do not consistently have enough to eat. The body's response could contribute to obesity, by "becoming more efficient at storing more calories as fat," according to the report. Also, people who are homeless are more likely to suffer from a lack of sleep and high stress, which contribute to obesity.

When it comes to food choices, they do not have many. Even if they had fresh vegetables and fruits, they have to way to store them or prepare them.

"Homeless people don't have the ability to choose," said Dipietro. "They eat what they're given. When you're moneyless, you don't have a stove or fridge. You don't have a place to store food or prepare it. Everything you buy is easy-to-go, that you can store in the bag for later - that's high in preservatives like canned foods."

The kinds of foods served at soup kitchens are designed to feed the masses at a cheap, low price, she added.

"Nutritious food is really expensive compared to other food choices," she said. "If you're living on food stamps, on disability or safety net, or living on nothing, that's the food you're going to have to get. A salad is not in the cards."

Some people are inclined to buy a homeless person a meal rather than give them money. This obesity issue shouldn't deter those people from reaching out, she said.

"If you want to take them to McDonald's and buy them a Big Mac, that's not the difference between obesity and health," she said. "You can buy them a salad. There are even options at McDonald's. If someone was willing to create a connection to take them a buy a cup of coffee, that connecting with someone is the important piece. At the individual level, you're not making a difference in health in one meal."