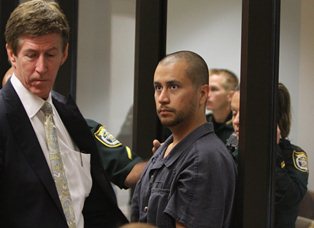 (CNN) -- George Zimmerman gave a scathing review of the Sanford Police Department when he spoke at a public meeting in January 2011, describing what he'd seen on ride-alongs with officers as "disgusting."

But on September 18, 2011, he wrote an e-mail thanking the city's police chief and praising the department's "professionalism."

Zimmerman, a neighborhood watch volunteer, is charged with second-degree murder in the death, which sparked nationwide protests and inflamed public passions over race relations and gun control.

His relationship with police is something critics of the case have questioned, noting that Zimmerman worked closely with officers as part of his work with the neighborhood watch program he started.

Zimmerman was once sharply critical of police in Sanford, according to an audio recording of a January 8, 2011, public meeting at Sanford's City Hall obtained by CNN.

"I also have had the opportunity to take ride-alongs with the city of Sanford Police Department and what I saw was disgusting," Zimmerman said at the time. "The officer showed me his favorite hiding spots for taking naps. ... He took two lunch breaks and attended a going-away party for one of his fellow officers."

Zimmerman asked members of the City Council to repeal the pension of the city's former police chief.

"I would just like to state that the law is written in black and white. It should not and cannot be enforced in the gray for those that are in the thin blue line," he said.

Sanford Police Capt. Robert O'Connor told CNN that the department does not have specific details about when Zimmerman rode with police or whom he rode with, "if in fact he ever did ride with SPD."

On September 18, 2011, Zimmerman wrote an e-mail to the then-chief of Sanford's police, saying that he had "a completely new perspective" after working closely with the department's community volunteer coordinator.

"I have not had a positive perspective of Sanford Police Department," he wrote, according to a copy of the e-mail obtained by CNN after a records request.

But he said working with the department's community volunteer coordinator as part of neighborhood watch efforts "to curtail the spike in robberies and home invasions in (the) neighborhood within the past two months" had changed his view.

He praised the volunteer coordinator's quick responses to e-mails and phone calls, saying she went "above and beyond to help launch a neighborhood watch" and calling her "a testament to the highest level of professionalism of (the chief's) administration."

"I have high hopes for, and restored faith in your administration and the Sanford Police Department in its entirety," he wrote.

Sanford interim Police Chief Richard Myers declined comment to CNN, but told the Miami Herald newspaper in a written statement, "Based upon the questions being posed, it would be inappropriate for any of us to speculate or conclude anything gleaned from the recording or any e-mail documents.

"Neither the city manager nor the interim police chief were with the City of Sanford at the time the recording was made, and neither were here during the tenure of the former chief cited in one of the questions," the statement said. "As a police chief I embrace the notion that transparency helps build public trust, but in this case, the need to preserve the sanctity of a criminal prosecution for both the prosecutor and the defense requires us to eschew making any comments that could taint the process."

A video obtained by the Miami Herald showing Zimmerman in the Sanford Police Department three days after the killing of Martin may also illustrate Zimmerman's relationship with the police. The short video shows Zimmerman, the back of his head bandaged, walking by himself in a stairway of the police station.

Beginning in August 2011, Zimmerman exchanged e-mails with the Sanford police department at least three times, the court documents show. A rash of burglaries that began in July prompted the watch captain to ask the police department to host a neighborhood watch presentation for members of the community.

Zimmerman's e-mails with Sanford police show a pleasant, even friendly, relationship. In an e-mail dated September 19, Sanford police volunteer coordinator Wendy Dorival thanked Zimmerman for his "kind words" sent to the chief. He responded, "It was with great pleasure that I sent that e-mail, you deserve the recognition!"

Police records indicate that five burglaries were documented in the neighborhood where Zimmerman lived in less than three months, starting in mid-July.

At the neighborhood watch meeting on September 22, according to court documents, Sanford police distributed contact cards and hosted a presentation on crime-prevention and security measures. Some of the fliers distributed read, "Report suspicious persons ... activities ... or vehicles." Another reads, "Know your neighbor" -- going on to issue advice on how to "profile" your neighborhood block.

Less than six months later, on February 26, Zimmerman shot Martin. He told police he shot the teen in self-defense.

Zimmerman was charged with second-degree murder in April.