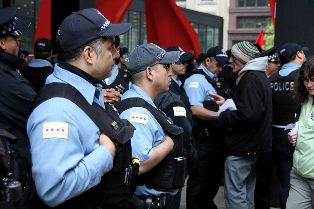 CHICAGO (AP) -- The sight of Chicago police raising billy clubs against demonstrators Sunday was the kind of image that has dogged the city's police force longer than most of those who clashed with protesters have been alive.

But Monday, a day after the clash during the NATO summit played out on television, virtually no one was talking about a "police riot," as they did in 1968 when baton-wielding officers waded into crowds of demonstrators during the Democratic National Convention. Nor was there the kind of criticism that was leveled at the Seattle police after a violence-plagued 1999 international summit.

Protest leaders outside the venue where President Barack Obama was meeting with world leaders offered a harsh assessment of police tactics. But most others praised the police for their restraint, and in public, they performed mostly as Superintendent Garry McCarthy vowed they would, from their crowd-control tactics to their interactions with protesters.

"We got them trained and equipped, and they executed the plan on all levels," McCarthy said, on the street Monday during a march outside Boeing Co. headquarters. "It hasn't been that big of a deal, quite frankly. It's almost like it was harder dealing with the hype than the event itself."

Chicago police spokeswoman Carolyn Deming said late Monday that 90 people were arrested and eight officers were injured before and during the summit. Authorities said many of those arrested were released without charges being filed.

McCarthy, who literally stood behind his troops pointing and shouting orders during the worst clashes with protesters, said Chicago's performance dealing with the protests was a "how-to" for other cities. "And that is to be patient and tolerant," he said.

The assessment was shared by some who have studied the department and its history of brutality.

"I think they helped their reputation," said Craig Futterman, a University of Chicago law professor. "Generally speaking, the CPD seemed to exercise an extraordinary amount of restraint."

From what can be assessed from publically available accounts, officers only used their batons in face-to-face confrontations with protesters pushing against police lines, what McCarthy called "assaults" on his officers. They used bicycles, both to escort protesters and as portable barricades. They employed intelligence gathering, starting long before the summit. That led to the arrests of five men on terror-related charges - including three accused of making Molotov cocktails in a plot to attack President Obama's campaign headquarters and other targets - days before the summit started.

Perhaps most significantly was the way officers handled alleged troublemakers. McCarthy said the officers were training to "surgically extract" individuals who broke the law in a way that disrupted crowds as little as possible - in contrast to confronting entire crowds as the department had done in the past.

On Sunday night, for example, a few minutes after a full water bottle flew out of a crowd of protesters and into a phalanx of riot gear-clad officers in front of the Art Institute of Chicago, a team of five or six officers emerged, rushing across the street.

In seconds, they had grabbed the man they thought was responsible, dragged him back across the street and through their own front line of officers that opened up long enough for them to get by before closing ranks again.

Though there was some shouting, protesters appeared to accept what they'd just seen, with some demonstrators even joking to each other that the police had, in fact, captured the man who threw the bottle.

What they didn't see was the officers, in the minutes before the arrest, pass information to each other about who they thought threw the bottle, telling each other what he was wearing.

In fact, the officers may have had help. A key component in the plan to target individuals was using what is widely considered the most extensive surveillance system in the United States. Inside the city's emergency center, what was happening wherever protesters gathered was being watched on what looks like a movie screen, and the information being relayed back to the commanders on the street.

Officials at the Office of Emergency Management and Communications could not immediately say whether emergency workers at the center aided in that arrest but said they provided information that helped officers identify individuals who broke the law during Sunday's protest.

If that kind of communication helped police, there was one incident in which a lack of communication led to what was perhaps one of the most ominous scenes of the weekend: Those minutes when officer after officer could be seen putting on gas masks.

McCarthy said what started as radio traffic of a single protester wearing a gas mask turned into talk among the officers that turned into what many thought was an order to prepare.

"I said, wait a minute, I'm the one who is supposed to give the order for gas," McCarthy said. And, he said, he hadn't done that. "That was just a miscommunication."

Not everybody agreed the police acted properly. Whatever violence there was, said Joe Iosbaker, a protest organizer, was the fault of police, not the protesters. And he tried to compare the events with what happened on the city's streets in 1968. Dozens were arrested, and protest leaders reported a number of people injured.

"It's not the same proportion, but the images have to be discussed in that context," he said.

But other protesters didn't see it that way. Liz Floyd, of Ohio, 26, wondered why there were so many police on the street but did not think that those she saw used excessive force.

"I think they behaved overall," she said.

The police were roundly praised by Mayor Rahm Emanuel, who had worked hard to lure the summit and likely had the most to lose if it did not go well. He said he personally thanked more than 400 officers.

"They did a tremendous job under very stressful circumstances over the last four days, and they make every one of us proud," he said. "I wasn't there, but I do know this: They showed the city and the country why they are the finest police department in the country."

Futterman said that video shot by protesters, observers and the Police Department - and the many security cameras around the city - ultimately might show what mistakes police made.

But he said there is no disputing that police could have turned a tense situation into something much worse had they used their billy clubs more aggressively, used so-called sound cannons to create ear splitting noise or doused protesters with pepper spray.

"They had all that (at their disposal) and they didn't go there," he said.