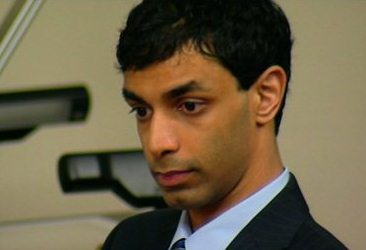 (CNN) -- A New Jersey judge on Monday sentenced Dharun Ravi to 30 days in jail for spying on and intimidating his gay Rutgers University roommate, Tyler Clementi, who then killed himself by jumping off New York's George Washington Bridge in September 2010.

Ravi will serve three years of probation and must complete community service aimed at assisting victims of bias crimes, according to Superior Judge Glenn Berman. He also must pay more than $11,000 in restitution.

However, Berman stayed the jail sentence for 10 days in case of an appeal at the request of defense attorneys.

The September 2010 death of Tyler Clementi, and Ravi's trial this year, thrust the issue of cyberbullying and prejudices against homosexuals into the national spotlight.

Clementi, an 18-year-old freshman, plunged to his death in the Hudson River after learning that Ravi had secretly spied via a webcam as Clementi kissed another man.

"I haven't heard you apologize once," Berman told Ravi, 20. He said Clementi "placed his trust in you without any conditions, and you violated it."

Ravi, he said, acted out of "colossal insensitivity."

Berman took factors including Ravi's youth and his lack of a criminal record into consideration.

Ravi could have faced 10 years in prison and deportation to his native India.

In the months that followed Clementi's death, President Barack Obama released a videotaped message condemning bullying, while New Jersey legislators enacted stricter laws to protect against it in schools.

"My son Tyler was a kind and gentle soul," Joe Clementi said of his son. "... Nobody other than Tyler understood how vulnerable he was, but the fact is that he was very vulnerable -- and he was shaken by the cold, criminal actions of his roommate."

James Clementi recalled his brother was excited about attending college. "He could never have known the viper's nest he was walking into," he said.

Family members blasted Ravi for showing no remorse. "I have often found myself wondering if Dharun Ravi is even capable of empathizing with another person," James Clementi said.

Jane Clementi said that when her son died, "My world came crumbling apart."

A victim impact statement was also read on behalf of the man involved in the videotaped encounter, identified only as "M.B."

"I do not mind that Mr. Ravi has never apologized to me for what he did and said, but I do wonder if it ever has entered his mind that he has caused me a great deal of pain and yet he knows nothing about me," the statement said.

Ravi's parents also addressed the court, although he chose not to speak.

"Not a single day goes by we don't think about Tyler," said his father, Ravi Pazhani. But he said his son had been demonized and "dragged through the mud."

"How can a person who never acted as a bully ... go from a passive child to hardcore bully overnight?" he asked.

His mother, Sabitha Ravi, cried as she related the stress and pain her son has experienced since Clementi's death. "He has been living in hell for the past 20 months," she said.

Listening to her statement, Ravi grew tearful for the first time during the hearing. After his mother finished speaking, the two embraced as she sobbed.

Before the statements were offered, Berman denied defense motions for acquittal and requesting a new trial.

Though Ravi and Molly Wei -- a fellow student who admitted to joining Ravi to watch the surreptitious encounter that others were alerted to via social media -- were charged in the wake of Clementi's suicide, they were not charged directly with his death.

Facing two counts of invasion of privacy, Wei reached a plea deal that required her to testify against her friend and former high school classmate as well as to complete a three-year program on cyber bullying and do 300 hours of community service.

Prior to sentencing Ravi, Berman said he was planning to terminate Wei's program early, noting that she testified candidly against Ravi although "it was clear she didn't want to be here." He said she had completed 250 hours of community service before her testimony.

Ravi, who was studying on a visa at the New Jersey university at the time of the incident, turned down a plea deal offered by Middlesex County prosecutors.

Under the terms of that offer, he would have avoided jail time in exchange for undergoing counseling, doing 600 hours of community service and disposing of any information that could identify the man who appeared in the Web video with Clementi.

Prosecutors also offered to help Ravi avoid deportation, though they said they could not guarantee it.

That set the stage for the trial, during which prosecutors argued that Ravi tried to embarrass Clementi because he was gay and that his actions were motivated by a desire to intimidate the Ridgewood, New Jersey, native expressly because of his sexual orientation.

"These acts were purposeful, they were intentional, and they were planned," prosecutor Julia L. McClure told the jury on the first day of the trial. Ravi "was bothered by Tyler Clementi's sexual orientation," she later said more bluntly.

Ravi's attorneys countered by saying that their client acted thoughtlessly, portraying him as an immature college student who made a mistake, and that his actions were not based on homophobia.

After more than three weeks in court, a jury on March 16 convicted Ravi of invasion of privacy, bias intimidation, witness tampering, hindering apprehension and tampering with physical evidence.

Days after his conviction, Ravi told ABC television's "20/20" that he thought Clementi understood he "wasn't trying to intimidate him and scare him because he was gay." He also criticized how the story of what happened was portrayed.

"I felt like I was being used by everybody," said Ravi, who did not testify on his own behalf. "They were taking revenge on me, even though what they think happened isn't what happened."