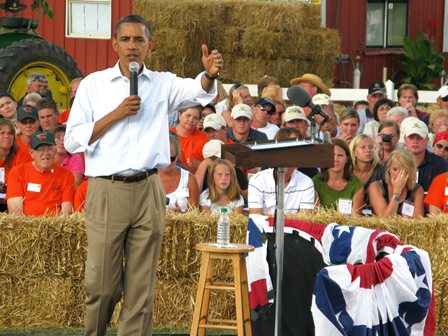 The events launch the Veterans and Military Families for Obama campaign, and will emphasize the president's record as commander in chief. The events will also tout his efforts on behalf of veterans and their families, according to a press conference call by the campaign.

The campaign will use the events -- which include phone banks, press conferences and house parties -- to take aim at likely GOP nominee Mitt Romney's budget, which it claims would lead to billions of dollars in cuts to programs benefiting veterans.

Obama's outreach director responsible for veterans and military families said he sees changes among military voters which would favor the president and Democrats in the future.

"We're going to break down that mythology about the military voting history and the veteran voting history," Rob Diamond told reporters on a conference call Thursday afternoon. "There's a changing demographic out there and a changing military and this new voting pattern netted the president nearly 4 million votes [in 2008]."

As part of an organized attack from the Republican National Committee to counter Obama's steps, Republican Rep. Randy Forbes of Virginia said the Virginia location was "ironic" given the president "just hasn't been putting a priority on the national defense or on our veterans."

"It's so ironic that they would even have an event in Virginia where they came in and put a bull's-eye on Virginia ever since they've been in office," Forbes, who serves on the House Armed Services Committee, said Thursday on a conference call with reporters.