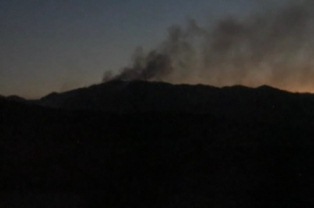 CROWN KING, Ariz. (AP) -- Firefighters were working to prevent a wildfire near the historic mining town of Crown King from spreading to an area where it could quickly grow.

Authorities are worried that flames will get past a fire line about a mile west of the mountain town, fire incident spokeswoman Loretta Benavidez said late Tuesday.

If that happens, a bowl in the terrain could help the blaze move south, a development that would threaten homes and businesses in the town, Benavidez told the Arizona Republic ( http://bit.ly/KlEe03 ).

"There could be a potential for fire behavior that would not allow (firefighters) to go in safely," she said. "With the potential for wind in the coming days, that's always a possibility."

Wednesday and Thursday will be the "tell-tale days," she said.

The fire has consumed more than 2,000 acres, destroyed two homes and a trailer and prompted an evacuation order on Sunday.

Winds estimated at 35 mph on Tuesday helped the fire grow, fire officials said. The Crown King area remained under an evacuation order Tuesday, though authorities said most of the town's 350 residents had chosen to stay.

Crown King is a community of mostly summer homes about 85 miles north of Phoenix. It's a popular destination for all-terrain vehicles because of its numerous hills and gorges.

Smoke from a larger fire that began Saturday south of Payson drifted into Phoenix over the weekend. Forest officials said that the blaze grew from 8,500 acres to 12,000 acres by Tuesday evening, KNXV-TV reported (http://bit.ly/KlFNuF ).

That blaze was burning in the high wilderness area of the Tonto National Forest and was 7 percent contained. No structures were threatened.

The fires follow a warning from Arizona land managers that hot temperatures and dry vegetation have created a very high fire risk in some parts of the state.