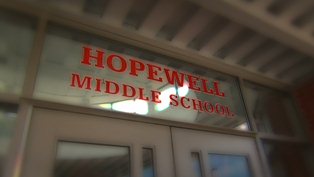 (CNN) -- Slammed into lockers, isolated in darkened schoolrooms, vulgar language by a teacher -- it was just another day at school for special needs student Alex Williams.

Recently released court documents say Alex, who has cerebral palsy, was routinely abused by teacher Melanie Pickens at Atlanta-area Hopewell Middle School between 2006-2007. Despite extensive abuse of Alex and other students that was substantiated by a Fulton County School district investigation in 2007, no charges have been filed against teacher Melanie Pickens or then-Principal Frances Boyd. None of Pickens' special needs students had the verbal abilities to tell anyone they were being physically and emotionally hurt.

You might expect that documented child abuse, in a public school, with many reports by teachers, school nurses, and staff, would automatically result in criminal charges - at least against the teacher actually doing the abusing.

The way the Williams family learned of their son's mistreatment was circuitous and indirect, according to Lisa and Doug Williams of Atlanta suburb Alpharetta. The parents of another student, Jake Marshall, informed the Williams, according to court documents released earlier this year. That's because the abuse of student Jake Marshall was the first to be uncovered. Now 19, Jake lives with Angelman Syndrome and is non-verbal.

Back in 2004, special needs teacher Melanie Pickens taught a class of middle school students, at Hopewell Middle School, in the Atlanta suburb of Milton. She taught in an area of the school called G Hall, which is the section of the school used solely for special needs students.

In May 2007, another special needs teacher, Susan Tallant, says she found Jake isolated in a room, alone and strapped in a chair. She says it was obvious he'd been there a long time, because he was covered in his feces. "He had defecated and actually gotten it everywhere. All over him, all over the chair he was sitting in, all over the floor," Tallant said in an exclusive interview with CNN's Julie Peterson.

Tallant's colleagues discouraged her from reporting what she'd seen. They told me "I could say something to the higher-ups but nothing would ever get done," Tallant says.

Tallant wrote up the Jake Marshall incident. Her written report forced a formal investigation commissioned by the Fulton County School District. "I was just doing my job," Tallant told CNN.

Outside investigation firm BDI was hired by the Fulton County School District immediately following the May incident. Recently released court documents reported BDI's conclusions. BDI found that many teachers and school nurses made verbal reports about Pickens' treatment of students but nothing had been done. Judge Kimberly Schroer's decision in the Williams case states that Pickens' abuse "was known and reported by the G Hall staff, but that Boyd refused to act on their reports."

A principal is required to report allegations of child abuse under Georgia law.

Court documents say the investigation uncovered that from 2004-2007, teacher Pickens had been doing many violent things to her students: slamming one boy into lockers face-first nearly every day, screaming at the children, pressing her breasts in students' faces, hitting them, and calling the students vulgarities. In one incident, the report said Pickens even sprayed a girl with Lysol after the student passed gas.

Both teacher Pickens and Principal Boyd lost their Georgia teaching certifications, says the Professional Standards Commission's John Grant. Pickens was gone immediately from the school, in the summer of 2007, and Boyd was taken out of her principal position and put in a school job that allowed her to use up her paid and unpaid leave, retiring with her pension in 2008. In surrendering her certification, Boyd said she did not violate the Code of Ethics in any way.

Boyd now is an adjunct teacher of education at the College of Charleston in South Carolina, CNN has learned.

Pickens has denied the abuse, in court documents, and Boyd has stated that she actually reported the abuse to the Fulton County School District's Personnel department and was told not to fire Pickens. Neither Pickens nor Boyd has applied to have their teaching certifications renewed.

Neither Pickens nor Boyd nor their lawyers would accept our invitation to provide comment for this story, citing pending litigation.

In the course of the district-commissioned investigation, Jake Marshall's parents were interviewed in 2007- they say this was the first clue to them that something was amiss. The school system still hadn't told them anything, the parents say. The Marshalls then began a two-year process of trying to obtain documents of what happened to their son. This eventually resulted in the Marshalls filing a complaint against the Fulton County School District. The complaint was resolved, and agreement details are confidential.

Judy Marshall, mother of Jake, called Lisa Williams, mother of Alex, to let her know what she learned from the 2007 district investigation. Williams learned that her son Alex, who has cerebral palsy, was hurt by Pickens nearly every day. This explained changes in his behavior- like refusing to use the toilet. The Williams family couldn't explain at the time, back in the 2006-07 school year when Alex was in Pickens class.

In fact Jake's father, a pediatrician, looked hard for a physical reason for Jake's regression. Only later did he recognize his son's symptoms as post-traumatic stress disorder.

In February, an administrative court confirmed that the Fulton County School District knew about Pickens' abuse but never told parents. Court documents say Alex Williams was denied the "free, appropriate public education" he is due by law.

The Fulton County School District was ordered to pay for 5 years of special instruction and therapies for now 19-year-old Alex Williams to help him regain lost ground.

Pickens and Boyd were long gone when current Fulton County Superintendent Robert Avossa moved into the job in June 2011. Avossa says there are new procedures in place to keep abuse allegations from going unnoticed. "We decided to develop a more robust reporting process so that we ensure that there's no single point of failure," says Avossa. "So you report it to the principal, you report it to HR, you report it to the state." He adds that in the instance of principal Frances Boyd, "People reported it to the principal allegedly, and that person didn't act on it the way that they needed to. So we're broadening that scope."

With the February court decision making the substantiated abuse public, parents, whose children were students in Pickens' class at various times between 2004-07, are piecing together what happened to their kids. They say the Fulton County School District has never communicated with any of them about the abuse substantiated in the 2007 report. The parents say the only way they know about how their kids were mistreated is by reading the report supplied as revealed in the February Williams decision. No wonder some parents are angry.

Judy Marshall, mother of Jake: "It just infuriates me that this has happened to all these kids that were all non-verbal, couldn't go home and say: Mom, Dad, I don't want to go and this is why."

Each parent we spoke with says they now understand why their children regressed at the time they were in Pickens' class.

Lisa Williams, mother of Alex: "They all regressed in potty-training, they all started isolating themselves in their rooms."

Doug Williams, the pediatrician and Alex's father, says "I thought he had something medically going on. And we kept searching for it. And unfortunately we found it was the abuse and the PTSD that was really causing all his regression and his symptoms."

Shayne Lee, mother of Garrett: "He was just crying, crying, just miserable, and I just thought, I thought maybe the medication was not effective."

Why hasn't Fulton County District Attorney Paul Howard's office charged anyone involved in the abuse? CNN made repeated attempts to obtain comments from the DA's office, but we were told the Fulton County school police were still collecting information to be presented to the DA's office.

Did then-principal Frances Boyd report the abuse to Personnel and a school social worker, as she stated in a recent court document? And if she was in fact told "not" to fire Pickens at that time, why would this be so?

Why do teachers and staff at Hopewell say they were intimidated by Principal Boyd? The court determined Boyd created an "air of intimidation" that made staff afraid they'd lose their jobs if they reported Pickens.

So as Fulton County schools have a new superintendent, Hopewell Middle School has a new principal, and with new reporting procedures in place, many parents say they want charges filed. District Attorney Paul Howard's office and Fulton County school police tell CNN the school police continue to collect background -- eight years after the substantiated abuse began. Meantime, parents say their children will be making up for lost ground for a very long time.

"It may take a lifetime to get these kids back to where they were," says Judy Marshall.