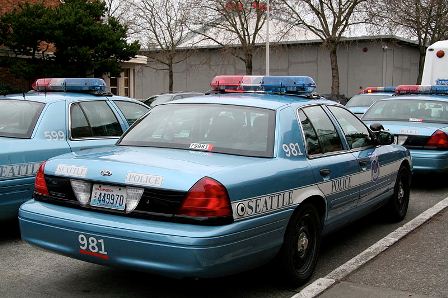 SEATTLE (AP) -- Seattle's mayor may soon have something in common with tough-talking Arizona Sheriff Joe Arpaio.

McGinn is due to respond this week to DOJ demands for reforms in the Police Department.

If McGinn doesn't agree to make changes that satisfy the DOJ and agree to the appointment of an outside monitor, he can expect a lawsuit from the U.S. attorney in Seattle as early as next month.

That's the same ultimatum - standard in DOJ reviews of police departments - that drew an objection from Arpaio, who said he couldn't stomach the idea of an independent monitor undermining his authority.

"I am not going to surrender my office to the federal government," he said last week after the DOJ sued him over allegations that his department racially profiled Latinos.

It was only the second time since the verdict in the Rodney King police brutality case and Los Angeles riots that the Justice Department filed a lawsuit against a law enforcement agency with which it was unable to reach an agreement.

On Monday, McGinn said for the first time that, in principle, he would agree to a monitor and a court-enforced settlement.

But speaking on public radio station KUOW, he also said the changes proposed by federal prosecutors - including increased training and the hiring of more sergeants to supervise street officers - could cost the city $41 million a year.

He said the changes could also jeopardize the department's ability to respond to public safety emergencies, and the cost could require cuts to important city services.

The DOJ disputes those points, calling the cost projection "simply wrong" in a written statement. Prosecutors invited McGinn to bring any concerns to their attention and said they remain optimistic they can reach an agreement with the mayor.

"Constitutional policing does not inhibit or hamstring the police," U.S. Attorney Jenny Durkan said. "The city of Seattle and the police who do their jobs can't afford for us not to fix the problems. On every front, the cost is too high, for everybody."

The city's counterproposal to the DOJ would require no more than $5 million per year, according to a confidential city budget office memo obtained by The Associated Press.

Seattle is facing a projected budget deficit of $32 million over the next two years.

Surveillance cameras and police-cruiser videos captured officers beating civilians, including stomping on a prone Latino man who was mistakenly thought to be a robbery suspect, and an officer kicking a non-resisting black youth in a convenience store.

In December, a DOJ report found officers are too quick to reach for weapons, such as batons and flashlights, even when arresting people for minor offenses.

In all, the report found, one out of every five times an officer used force, it was used unconstitutionally. The department failed to adequately review the use of force and lacked policies and training related to the use of force, it said.

In the meantime, the mayor and the police chief have proposed a series of initiatives called "20/20," including training to ensure that officers don't arrest or confront people based on race and training to prevent low-level offenses from escalating.

Though the DOJ's proposal has not been disclosed, the budget office memo suggests some of the changes the DOJ wants.

The memo relies on assumptions made by the Police Department that to satisfy the DOJ's demands for a better sergeant-to-patrol officer ratio, the city would have to add 54 new sergeants at a cost of $7.3 million.

In addition, the memo said the Police Department estimated that the DOJ's recommendations would require four times as much training - 160 hours per year - as officers currently receive. Executive Assistant U.S. attorney Thomas Bates described that assumption Monday as vastly overstated: "They just got it wrong."

The memo said that the additional training could cost $18 million if it requires other officers to fill in - on overtime - for those receiving training. However, the mayor's "20/20" plan also includes increased training in many of the same topics the Justice Department is concerned about - and the Police Department has represented to McGinn that it can accomplish everything in the "20/20" plan under its existing budget.

The memo notes that the budget office had not yet vetted the assumptions being made by the Police Department, and that even if the actual costs are far less than $41 million, the hit to the budget could still be significant.

In his radio interview, McGinn said "absolutely" when asked if the reforms would hamstring police and the mayor's office in responding to emergency situations. He suggested the outside monitor could effectively be a "shadow mayor."

"That is not a legitimate fear," Burgess said. "I'm disappointed in the mayor's recent statements on this topic have been more designed to divide rather than keep us on the same page headed toward good solutions."

Josh Chanin, a San Diego State University professor who has studied the DOJ's efforts to reform police departments, said such monitors are essential to the process because they demonstrated to the public that the changes are actually taking hold.

They can also ensure reforms last beyond the terms of the current mayor, police chief or U.S. attorney.

"This is the most effective, most straightforward way to get to the point where the department is operating constitutionally and regains the respect and legitimacy it needs to manage law and order," Chanin said.

Johnson can be reached at https://twitter.com/GeneAPseattle .