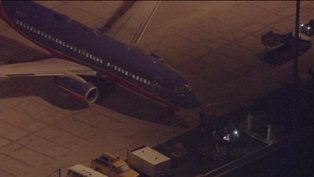 (CNN) -- Two Southwest Airlines flights from Orange County, California, to Phoenix were the subject of security scares Tuesday night -- and authorities are investigating whether the incidents are linked.

Both planes were eventually cleared after officials determined a threat did not exist.

In the second incident, Southwest flight 1184 was taken to an isolated area at Sky Harbor after it flew in from John Wayne after authorities received a "non-specific threat," said Ashley Dillon, the spokeswoman for the airline in Dallas.

Passengers and their bags were re-screened. and authorities did not find anything, Dillon said.

"We take any kind of threat seriously," she said.