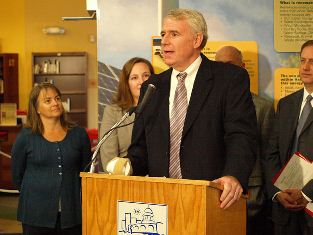 MADISON, Wis. (AP) -- Wisconsin voters filed into polling stations Tuesday to decide whether to give Milwaukee Mayor Tom Barrett a rematch against Republican Gov. Scott Walker in next month's rare recall election or whether to back one of Barrett's fellow Democrats.

Barrett was one of four Democrats on Tuesday's primary ballot looking to unseat Walker in the June 5 general election, in a closely watched contest seen as a battle over union rights. Barrett lost to Walker by roughly 5 percentage points two years ago, but that was before the newly-minted governor and Republican-led Legislature stripped most state workers of collective bargaining rights.

That law, and the Democratic maneuvering and large pro-union protests that preceded its passage, made Walker a villain to the American left but a hero to conservatives, who have helped him shatter state fundraising records by collecting $25 million, mostly from out-of-state donors.

Walker has embodied the Republican rise to power in 2010 and hopes to avoid becoming just the third governor to be recalled in U.S. history.

Carl Schramm, 77, a Whitefish Bay man who works part time for a plumbing and heating contractor, said he voted for Walker.

"It should never have come to this crap," he said of the recall election. "It's stupid. It costs a lot of money. He was duly elected."

Polls heading into the primary have consistently shown Barrett ahead of the other Democrats, including one last week that showed him 17 points up on his nearest rival, Kathleen Falk. Barrett's emergence as the front-runner was aided by his strong name recognition across the state, having just run against Walker for governor in 2010. Walker beat Barrett by about 125,000 votes, or roughly 5 percentage points.

Jon Dzurak, a 55-year-old assistant principal in Milwaukee, said he initially was leaning toward Falk but decided to vote for Barrett because he was up in the polls and projected to fare better against Walker.

"Whichever one wins is going to get my vote," he said. "I just would like to see Scott Walker defeated. I've never seen a division in our state like this. I'm not talking to some of my friends right now because of it."

Amy Westrup, a 41-year-old marketing consultant from Whitefish Bay, said she voted for Barrett as she did the first time he ran against Walker. The chance to overturn its result is "the ultimate mulligan, the do-over" for the state, she said.

Jessica Schafer, a 38-year-old marketing manager who lives in Milwaukee, said she voted for Falk, despite voting for Barrett two years ago.

Other Democrats on the ballot are Secretary of State Doug La Follette and state Sen. Kathleen Vinehout. They ran low-profile campaigns that failed to gain traction with voters. Gladys Huber is a Republican running as a Democrat.

Walker faces token opposition in the GOP primary from Arthur Kohl-Riggs, a Walker opponent running as a Republican.

Falk snared key endorsements in the recall race from unions, including the AFL-CIO and the statewide teachers union. Falk promised to veto any budget that doesn't restore the collective bargaining rights Walker took away, while Barrett has refused to make such a promise.

Despite their differences, the Democratic primary was mostly devoid of internal attacks. The candidates instead stayed largely focused on Walker and the policies he enacted over 16 months in office.

While the union fight spurred the recall, the campaign has been much broader and focused largely on Wisconsin's economy. Though the state's unemployment rate is at its lowest level since 2008, Wisconsin lost more jobs than any other state between March 2011 and March 2012. Since Walker took office, only 5,900 private sector jobs have been created.

Lt. Gov. Rebecca Kleefisch and three Republican state senators also face recall elections. There is an election in a fourth Senate district where the Republican incumbent targeted for recall resigned rather than run to keep her seat.

Turnout in the primary was projected to be 30 percent and 35 percent of eligible voters, which would be the highest for a primary in a governor's race since 38.9 percent in 1952.