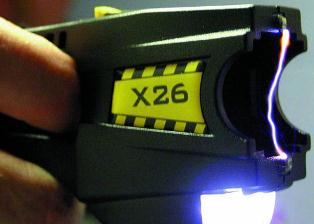 (CNN) -- An Indiana mother who sent her gay son to school with a stun gun after administrators apparently didn't do enough to stop the bullying against him said she would do it again -- even though the teen now faces expulsion.

"I do not promote violence -- not at all -- but what is a parent to do when she has done everything that she felt she was supposed to do ... at the school?" the mother, Chelisa Grimes, told CNN's Don Lemon on Sunday. "I did feel like there was nothing else left for me to do, but protect my child."

The school district held an expulsion hearing last week but no decision has been announced.

Grimes sent her son, Darnell "Dynasty" Young, to Arsenal Technical High School in Indianapolis with the stun gun after he said he was taunted and bullied for months.

After six other students surrounded him at school, calling him names and threatening to beat him up, Young pulled out the stun gun from his backpack. He raised it in the air, setting off an electric charge, and sending the group scurrying.

Unlike a Taser, which fire barbs attached to long wires at a target, a stun gun has to be near or pressed against a person to shock them.

"I got kicked out of school for me bringing the weapon to school, but I honestly don't think that that was fair," Young said. "I didn't use it on nobody ... all I did was raise it up in the air and went back to my class."

School police officers arrested him a short time later and took him away in handcuffs, The Indianapolis Star reported. School officials are investigating the incident, but none of the students who allegedly surrounded Young have been positively identified.

Young is known as a flamboyant dresser and Larry Yarrell, the Tech principal, said school staff had been trying to get him to "tone down" his accessories.

"I think that the self-protection device is what's making the news, but the big picture is that my child is not the only one who does not feel safe at our school," she said.

It a common complaint among lesbian, gay, bisexual and transgender (LGBT) students.

A 2009 survey of 7,261 middle and high school students found that nearly nine out of 10 LGBT students had experienced harassment at school over the previous year and nearly two-thirds felt unsafe because of their sexual orientation.

Young said rumors around campus suggested he was "doing nasty stuff" with teachers. The rumors took their toll.