Got the Munchies? a New Pot Eatery Opens in Ashland, Ore. 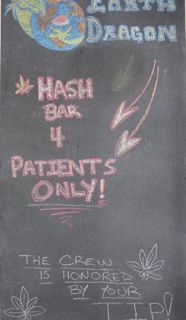 ASHLAND, Ore. (AP) -- After scraping together a mound of zucchini, broccoli, beef, pineapple and noodles on a big round Mongolian grill, Kevin Wallace measured out a shot of grapeseed oil infused with hashish and poured it over the steaming food, setting off a sizzle.

Thirteen years after Oregon became one of the first states to make medical marijuana legal, Wallace and business partner Michael Shea think they've found a way to fit in the big gray area between making a living from medical marijuana and going to jail.

Marijuana is indelibly associated with food, whether it is chemotherapy patients using the drug to try to develop an appetite, or, farcically, a couple of stoners with an overpowering case of the munchies in "Harold & Kumar Go To White Castle." Secret "herb dinners" with appetizers, entrees and desserts are reported in newspaper food sections. One restaurant chain, CHeBA HUT, is based on a marijuana theme. And patrons of the World Famous Cannabis Cafe in Portland can get a burger or lasagna packing a pot punch in between choruses of karaoke.

But restaurants where marijuana is the focus have had trouble gaining traction. The customer base is, after all, limited to medical marijuana cardholders. And any enterprise associated with medical marijuana will quickly come under scrutiny.

At the Earth Dragon Edibles Restaurant & Lounge in Ashland, Wallace and Shea are trying to bring Mongolian barbecue dosed with medical marijuana to a higher level, though they are still feeling their way through the fuzzy legalities of it all.

An Oregon medical marijuana card is required to get in the door. Inside, the place looks and operates pretty much like any other little Asian-style restaurant, with the smells of teriyaki and sounds of the grill filling the air. A wall hanging at the back depicts ganja guru Bob Marley. Diners go through a check list of vegetables, sauces, meats and tofu, and whether their bowl will be regular, large, or unlimited. One difference is the boxes to check for medicated or unmedicated. If medicated, there are three strengths. Cheesecake, candies and cookies, medicated or not, are also available.

While they wait, diners can use the hash bar, choosing from an assortment of glass pipes, a vaporizer, or a bong, hashish or bud. Marijuana donations are encouraged.

Operating under the theory that it is no crime for one patient to share medicine with another, all the marijuana - whether in the food or at the hash bar - is free. And unlike the marijuana cafes in Portland, there is no membership fee.

"I know it's a little weird," said Shea.

Ashland itself could be considered a little weird. Close to the California border and home to the Oregon Shakespeare Festival, it is an outpost of liberalism in conservative southwestern Oregon. Think of it as a little Berkeley in the middle of Orange County. It is also within the Green Triangle, one of the nation's best marijuana-growing climates. This corner of Oregon has the highest per capita rate of medical marijuana use in the state.

Wallace and Shea render their medical marijuana into hashish, infuse that into oil or glycerin, and eat it, believing that is healthier than smoking. With few patients able to do that, they felt they should share their skills to help others.

Wallace, 45, was a carpenter until a 4-by-4 fell on his head, compressing his spine. He remains on disability, but marijuana got him off conventional painkillers. Shea, 52, taught at his wife's preschool. He uses marijuana to treat pain from an old neck injury. Wallace already had a business license in nearby Medford making candies and chili dosed with hashish.

At the grand opening a week ago, staff had to ask one patient to put out his blunt - marijuana rolled in a tobacco wrapper - because it violated Oregon's law against smoking in restaurants.

Otherwise, there was no heat until the city sent back their business license request, saying a local ordinance barred licenses for anyone violating state or federal law.

"Nobody's life is at risk here," said Holderness. "We will prioritize this appropriately. But ultimately, if they are in violation of the law, they will be shut down."

The owner of Denver's Ganja Gourmet knows the feeling. Steve Horwitz said when he opened in 2009, people passed around a bong while dining on eggplant parmigiana and pizza made with cannabis. But Colorado changed its medical marijuana law, and he had to scale back to takeout and groceries.

"It was the future about five years before its time," he said.

Wallace and Shea remain open while appealing. They hope that if they keep separate bottles of hashish-infused oil on hand for each member/patient, rather than sharing their own stash, the city will no longer object.

"I like to support the cannabis community we have going on," said Totten. "It's kind of cool to have a place to hang out."

After a couple hits off the bong at the hash bar, she sat down to a medicated bowl of beef and broccoli, pronouncing it delicious.

"You can't really taste it that much," she said of the hashish oil.