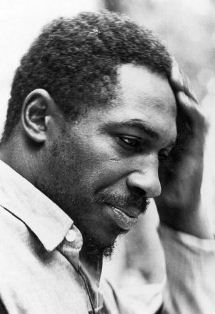 SIOUX FALLS, S.D. (AP) -- When civil rights activist Ray Robinson arrived at Wounded Knee in April 1973 to stand alongside Native Americans in their fight against social injustice, he excitedly called his wife back home and told her, "This could be the spark that lights the prairie fire."

"No, it's not. Come home. Please come home," his wife, Cheryl Buswell-Robinson, recalled begging of him.

The black activist and follower of Martin Luther King Jr. never made it home to Bogue Chitto, Ala. He was declared dead, but his body never was found and little is known about what happened. Not knowing has haunted Buswell-Robinson and the couple's three children for nearly 40 years.

Buswell-Robinson, 67, flew into Sioux Falls from Detroit on Thursday ahead of a conference commemorating the 40th anniversary of the 1973 American Indian Movement takeover of the Pine Ridge reservation village of Wounded Knee.

She's not looking for arrests or prosecutions. She just wants to know where her husband's body is so she can give him a proper burial.

"People have information as to where his body is buried," she said.

Two Native Americans were confirmed to have died during the 1973 siege, and rumors of other deaths persist. FBI documents that now are public suggest the possibility of people buried at Wounded Knee during the occupation. There's no mention of Robinson in the FBI correspondence, but two documents reveal the presence of two black people toward the end of the standoff:

- On May 5, 1973, a transcript of an interview with a man who claimed to be at Wounded Knee the week prior stated "he heard that one black man and one black woman had recently arrived."

Buswell-Robinson said those two were most likely Robinson and a black woman from Alabama who went with him. The woman returned after the standoff; Robinson didn't.

Buswell-Robinson filed a missing person's report with the FBI and in October 1974 traveled to Rapid City and the AIM headquarters in St. Paul, Minn., but said she learned nothing about what happened to her husband. In the years after Robinson's disappearance, she corresponded with writer and political activist Barbara Deming.

In a letter dated Dec. 29, 1974, Buswell-Robinson wrote that she had been told Robinson backpacked into Wounded Knee at night and was later shot for not following an order to immediately report to AIM co-founder Dennis Banks.

AIM member Richard Two Elk of Denver told The Associated Press in 2004 that he had seen someone shoot Robinson in the knees, but the reason was because he had refused to pick up a gun and was constantly annoying people in the bunker. Two Elk declined an email request from the AP this week to talk further about the incident.

Banks, in a telephone interview Thursday, said he can't recall ever meeting Robinson. He said the only recollection of Robinson he has is when his family visited AIM in St. Paul to ask for information.

"Over the years, the Robinson name has popped up and I'm not sure even who would have that information or where it was," Banks told the AP. "That's a complete blank to me."

Banks said there was no formal AIM investigation into the disappearance of Robinson or anyone else during Wounded Knee.

"We never conducted any, like, major search for anybody that was missing, just except by word of mouth, `Did you guys ever see this or that?' That's as far as I know and that's as far as it went," he said.

Clyde Bellecourt, another AIM co-founder, said he wasn't in Wounded Knee in April 1973. He left a month or so earlier to form the Wounded Knee Legal Defense-Offense Committee and act as AIM's spokesman.

"I've heard some rumors about this Robinson thing, but supposedly that happened a long time after I was gone, if anything did happen," he said. "Nobody's ever talked to me about it implicating anybody or even said it's happened."

Perry Ray Robinson Jr. was born Sept. 12, 1937. He was in Washington in 1963 for Martin Luther King Jr.'s "I Have A Dream" speech, and attended the 1964 funeral of three white civil rights workers killed in Mississippi.

In 1968, Robinson was among the protesters who set up Resurrection City, a camp at the Washington Mall.

Robinson likely was at Wounded Knee for just a day, but Buswell-Robinson is surprised so many AIM members don't remember him. The personable 6-foot-2 black man with a deep baritone voice would have stood out on a Midwest American Indian reservation, she said.

Robinson's nonviolent approach probably was not well received at what was a violent situation, and it's possible AIM members incorrectly suspected he was a federal informant, Buswell-Robinson said. It's also likely he dealt with some racism, she said.

"I'm hoping that AIM people can look in their hearts and realize this was a good man. This is a brother," Buswell-Robinson said. "This is a man that was willing to give his life for justice for what's right."

She said she traveled to the conference from her current home in Detroit because she'd like to talk to AIM leaders, anyone who was at Wounded Knee and the two women who ran the clinic where Robinson may have been taken.

At the least, she wants to get the Wounded Knee record corrected so it acknowledges her husband's presence.

"Maybe that's the best I can hope for, that in the official record Ray's name won't be excluded," Buswell-Robinson said. "Because right now, it's like he never existed."