Study: Tax Deadline Day Can Be Deadly on Us Roads 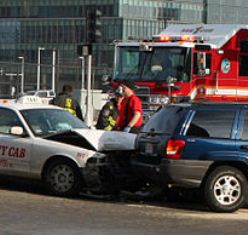 CHICAGO (AP) -- The two certainties in life - death and taxes - may be more intertwined than Ben Franklin ever imagined: A study found that deadly auto accidents increase on Tax Day.

Drivers recklessly racing to the post office to meet the deadline might be one reason. Or it could be that stressing over taxes distracts motorists and contributes to human error, researchers said.

They looked at 30 years of data and found 6,783 traffic-related deaths on Tax Day, or 226 per day. That compares with 213 per day on one day a week before the deadline day and another day a week after.

Drivers were slightly less likely than passengers and pedestrians to be killed.

The traffic death rate on Tax Day - which usually falls on April 15 - was 6 percent higher than on other April days. That doesn't sound like a lot, but lead author Dr. Donald Redelmeier said it means an average of about 13 extra deaths per day and amounts to about $40 million in annual losses to society.

That estimate includes loss of life, injury and property damage costs, said Redelmeier, a physician and researcher at the University of Toronto.

The researchers analyzed data from the National Highway Traffic Safety Administration. The results appear in Wednesday's Journal of the American Medical Association.

Russ Rader, a spokesman for the Insurance Institute for Highway Safety, said having more motorists on the road and drivers taking routes that are not in their everyday routines might make Tax Day riskier. Other research has said those factors, and sometimes alcohol use, may contribute to increases in traffic deaths on other days, including Super Bowl Sunday, July 4 and Election Day.

Rader says studies have shown that drivers are safest on routes they know the best - for example, commuting to work or taking the kids to school. Risk increases when routes vary - like driving to the post office to mail tax returns.

The nonprofit group is funded by car insurance companies and studies ways to reduce car crashes.

Dr. Mark Nunnally, an associate professor at the University of Chicago who studies patient safety, said while it might make sense to conclude that drivers are more distracted on Tax Day, that is just speculation. Reasons for the increases seen in the study are unknown, he said.

Redelmeier, a Canadian, said he studied the United States because the American tax code is so complicated, and probably more stressful for taxpayers, than in other countries.

The study examined data from 1980 to 2009. Electronic tax filing started in 1986 and become increasingly popular during the study period. But it appeared to have no effect on Tax Day deaths, which also increased, Redelmeier said.

Last year, about three-fourths of the 145 million individual returns were filed electronically. Eventually, everyone will likely file online.

Redelmeier said filing electronically can be stressful, too, and it might even encourage people to wait until the last minute to do their returns. For those reasons, he said it's unlikely universal e-filing will result in fewer Tax Day deaths.

A spokeswoman for the Internal Revenue Service declined to comment on the study.

This year, the IRS has postponed the deadline by two days, to April 17. That's because April 15 is a Sunday and the next day is Emancipation Day - a public holiday observed in Washington, D.C.

Canada's tax deadline day is April 30. Redelmeier said his own tax returns "are not quite ready," and added with a laugh, "It's caused some friction in the house."

The Canadian Institutes of Health Research helped pay for the study.