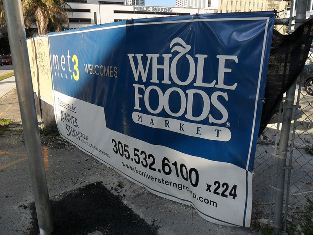 DETROIT (AP) -- A city infamous for its unemployment, decay, crime and population loss would seem an odd place for an upscale natural and organic grocery chain to plant roots, but yuppie favorite Whole Foods is taking a gamble on the Motor City.

The Austin, Texas-based retailer plans to open a 20,000-square-foot supermarket with about 75 employees in Detroit's Midtown next year. One reason it may be willing to take the risk is that the neighborhood is an anomaly in a tough city enduring very tough times: People are moving in, businesses are opening and hopes are high.

Midtown wouldn't yet qualify as a success story by revitalization standards in New York or Chicago. The 2-square-mile collection of smaller neighborhoods north of downtown still has vacancies and lacks the bustling, thriving feel of some of those larger cities' neighborhoods in transition. But it has solid anchors in Wayne State University, the Detroit Medical Center and cultural institutions such as the Detroit Institute of Arts and Orchestra Hall, as well as a growing number of startups and rehabilitation projects, and people are moving in thanks to relocation incentives offered by their employers.

It's a hip, bright spot in a city that narrowly avoided a state takeover last week when Mayor Dave Bing, the City Council and Gov. Rick Snyder agreed on a deal giving the state input on Detroit's finances and long-term fiscal restructuring. The city's budget deficit is about $200 million. Long-term structural debt is slightly more than $13 billion, and the city's unemployment rate is among the highest in the country.

"This is the one area (in Detroit) that has a different demographic - more upscale, more youth, more students. It's a great concentration of people," said Kenneth Dalto, a Michigan retail analyst. "They are buying into the plans of Detroit to grow the corridor."

Whole Foods Market Inc. had been in talks to bring a store to Detroit for several years when it began looking at Midtown in 2010. The company has said it has built relationships with Michigan farmers and feels it could offer something to Detroiters, who have long complained about having few places to buy fresh fruit, vegetables and produce.

Whole Foods co-Chief Executive Walter Robb is scheduled to speak Friday at the Detroit Economic Club about the company's commitment to Detroit.

The grocery chain has something in common with Detroit: battling adversity. It was hit hard during the recent recession and revamped itself by cutting costs, slowing growth and carrying more lower-priced foods.

Dalto said that last move will prove critical in Midtown, where the demographic mix includes plenty of 20-somethings who don't yet have the pocketbooks or palates for gourmet foods. He expects the store's selection will tilt a little more in favor of necessities and brands younger people grew up with.

"They're going to go lighter on some of the gourmet stuff ... and (stock) more brand names than names nobody has heard of or things that are overly expensive," he predicted.

Whole Foods can learn lessons from Zaccaro's Market, an independent gourmet grocer that opened in Midtown in April 2008 and closed less than a year later.

"The problem is they were too gourmet - this is not a gourmet area," Dalto said. "You have to have basic things ... they didn't have. You had to have things that got people in."

Midtown is not Whole Foods' first foray into urban areas where gentrification hasn't fully taken hold. The company opened a market in the Jamaica Plain section of Boston late last year, replacing a Latino market that sold its lease to the national chain. Jamaica Plain was plagued by drugs and crime in the 1980s but since has undergone a turnaround.

Some in the community welcome the diversity of foods offered by Whole Foods, while others fear poorer residents won't be able to shop there and the store won't provide staples for the neighborhood's large Latino population, said Eduardo Siqueira, associate research director for the Mauricio Gastón Institute for Latino Community Development and Public Policy at the University of Massachusetts Boston. There's also concern Whole Foods will accelerate gentrification, pushing up property values and rents to the point that many residents have to move.

"This became a very controversial issue for our neighborhood - the most polemical debate that I've seen in almost 20 years," Siqueira said. His institute is embarking a one-year study to determine Whole Foods' impact on Jamaica Plain.

Midtown resident Erik Nordin has mixed feelings about Whole Foods coming to the Detroit neighborhood he has called home for 15 years.

An artist and business owner with five rental units, he called it a "major step forward" and an indication that the neighborhood and city are "turning a corner." But Nordin also worried Whole Foods' presence could draw more national chains and hurt local merchants "who have worked so hard to make (Midtown) come back."