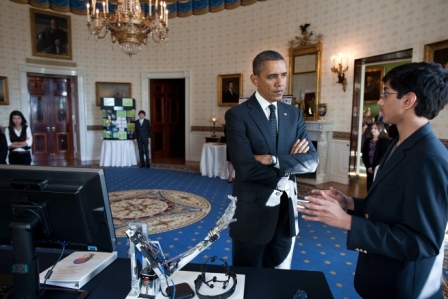 The president's 2011 federal income tax return shows that about half of the first family's income is the president's salary. The rest comes from sales of Obama's books.

Obama's effective tax rate is just above 20 percent - lower than many Americans who earn less. He has made tax-rate fairness a campaign issue, arguing that millionaires and other very wealthy people should not pay a smaller share of their incomes in taxes than people who earn much less.

"He believes that people like him should be paying an effective tax rate that is no lower than the rate paid by hard-working, middle-class Americans," White House press secretary Jay Carney said Friday.

The White House did not say exactly what rate Obama thinks would have been fair for him in 2011, but using a calculator posted on the White House web site, more than 56,000 millionaires would have paid taxes at a lower rate.

Obama's proposed "Buffett Rule" would not have applied to him last year, since he earned less than $1 million.

The plan is named for Warren Buffett, the billionaire investor who has complained that rich people like him pay a smaller share of their income in federal taxes than middle-class taxpayers do. Many wealthy taxpayers earn investment income, which is taxed at 15 percent. Obama has proposed that people earning at least $1 million annually - whether in salary or from investments - should pay at least 30 percent of their incomes in taxes.

The push for the realignment draws renewed attention to the effective tax rate of presumptive Republican presidential nominee Mitt Romney, a millionaire who is paying 15.4 percent in federal taxes for 2011 on income mostly derived from investments.

By contrast, the top nominal rate for taxpayers with high incomes derived from wages, not investments, is 35 percent.

The White House released a copy of the president's tax return, which also shows charitable donations of more than $172,000.

Their adjusted gross income for 2010 was far below the $5.5 million they reported for 2009, also mostly from book sales.

Carney said Obama earned even less in 2011 because of "fluctuations" in book sales.

On the latest return, the Bidens listed $5,540 in donations to charity.

Most of the couple's income came from the vice president's salary of $225,521 and Mrs. Biden's wages of just over $82,000 for teaching at Northern Virginia Community College.