Obama-Romney Showdown Starts Off with a Harsh Tone 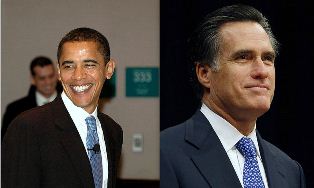 MENDENHALL, Pa. (AP) -- The 2012 presidential general election has begun. It won't be pretty.

"The campaign started yesterday, the general election campaign," Romney said Wednesday on Fox News when pressed on how he would counter continued Democratic attacks that he is an out-of-touch rich guy. "It's a little early in the process."

With Obama saddled with a still-ailing economy and a divisive health care law, and Romney riding a wave of blistering TV ads, the fall election is unlikely to dwell on "hope," "change" and other uplifting themes from four years ago. Much of the nation's ire then was aimed at departing President George W. Bush, and Obama had no extensive record to defend.

The landscape is much different now. Voters face nearly seven months of hard-hitting jabs and counterpunches between the two parties' standard-bearers.

Romney, the former Massachusetts governor making his second presidential bid, now has to unify his party, build out a general election campaign and start answering big questions like who he will choose as a running mate. He insisted Wednesday that conservatives will unite behind him and said he believes Santorum will campaign with him against Obama. He also suggested he is considering one of his formal rivals for the presidential ticket.

"There's a large number of people in the Republican party who are extraordinary leaders, including some of those who have run in this last contest with me, and so we'll go through that list and decide who could potentially become a president if that were necessary," he told Fox News.

Campaigning in Pennsylvania, where an April 24 GOP primary is suddenly less important than its likely role as a battleground state this fall, Romney portrayed Obama as a weak leader who apologizes for America's greatness and prefers European-style socialism over robust free enterprise. Obama's allies call such claims nonsense.

"The right course for America is not to divide America," Romney told a GOP dinner gathering in Mendenhall, near Philadelphia. "That's what he's doing," he said of Obama. "His campaign is all about finding Americans to blame and attack, and find someone to tax more, someone who isn't giving, isn't paying their fair share."

Obama, campaigning in Florida, said the choice in November will be as stark as in the 1964 contest between Lyndon Johnson and Barry Goldwater, which resulted in one of the biggest Democratic landslides ever. That election included dramatic and controversial moments, such as Goldwater's defense of "extremism in the defense of liberty" and a devastating TV ad suggesting a Goldwater presidency would lead to nuclear war.

The Obama campaign posted a YouTube video on Wednesday, the day after Santorum's withdrawal, noting that "as Republicans settle on a nominee," there are things voters should remember about the Romney campaign.

The presentation proceeds with video clips of a slew of Romney statements, including his pledge to see the Roe v. Wade decision legalizing abortions overturned, his statement that he'd rather see Detroit go bankrupt before backing a government bailout, his assertion that "corporations are people, my friend," and his declaration that he was an "extremely serious conservative" governor of Massachusetts.

Obama campaign manager Jim Messina said in a statement after Santorum's withdrawal: "It's no surprise that Mitt Romney finally was able to grind down his opponents under an avalanche of negative ads. But neither he nor his special interest allies will be able to buy the presidency with their negative attacks. The more the American people see of Mitt Romney, the less they like him."

Other Obama campaign officials have mocked Romney's wealth and called him out of touch with average Americans.

Romney and his allies, including a potent super political action committee, have proved their ability to raise millions of dollars to air brutally effective attack ads, which crippled Santorum and Newt Gingrich in the GOP primary contests. Obama will raise many millions, too, and few doubt that he will hit Romney hard.

The Republican super PAC Crossroads GPS is already on the air attacking Obama in six critical swing states. The group is spending $1.7 million to attack the president's energy record for a week in Colorado, Florida, Iowa, Nevada, Ohio and Virginia.

On Tuesday, Romney made clear that he will go after Obama's character as well as his record. In speeches in Mendenhall and Wilmington, Del., Romney said Obama isn't merely inept at economic policy, he actively dislikes business.

Obama "is clearly trying to hide from us what he intends to do," Romney said in Wilmington. "He's going to hide. And it's my job to seek."

Romney made similar remarks last month. Now, with Santorum off the stage and Gingrich and Ron Paul hardly a factor, there are no intra-party distractions to dilute such comments. Romney and Obama are fully engaged, one on one, at a much earlier stage than in 2008, when Obama had to parry Democratic rival Hillary Rodham Clinton throughout the summer before fully turning to Republican John McCain.

Even then, Bush's unpopularity helped fuel Obama's campaign and deflected some of the anti-GOP sentiment away from the actual nominee.

This time, the incumbent president is on the ballot, with unemployment above 8 percent. The tea party, which didn't exist in 2008, is a potent and unpredictable force.

And Romney suddenly is free of meaningful primary worries. That leaves him able to focus the full force of his fundraising and campaigning skills against Obama.