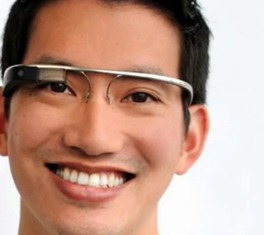 While wearing a pair, you can see directions to your destination appear literally before your eyes. You can talk to friends over video chat, take a photo or even buy a few things online as you walk around.

These glasses can do anything you now need a smartphone or tablet computer to do -and then some.

Google gave a glimpse of "Project Glass" in a video and blog post this week. Still in an early prototype stage, the glasses open up endless possibilities - as well as challenges to safety, privacy and fashion sensibility.

The prototypes Google displayed have a sleek wrap-around look and appear nothing like clunky 3-D glasses. But if Google isn't careful, they could be dismissed as a kind of Bluetooth earpiece of the future, a fashion faux-pas where bulky looks outweigh marginal utility.

In development for a couple of years, the project is the brainchild of Google X, the online search-leader's secret facility that spawned the self-driving car and could one day send elevators into space.

If it takes off, it could bring reality another step closer to science fiction, where the line between human and machine blurs.

"My son is 4 years old and this is going to be his generation's reality," said Guy Bailey, who works as a social media supervisor for a university outside Atlanta, Ga. He expects it might even be followed by body implants, so that in 10 years or so you'll be able to get such a "heads-up display" inside your head.

But is that what people want?

"There is a lot of data about the world that would be great if more people had access to as they are walking down the street," said Jason Tester, research director at the nonprofit Institute For the Future in Palo Alto, California.

That said, "once that information is not only at our fingertips but literally in our field of view, it may become too much."

Always-on smartphones with their constant Twitter feeds, real-time weather updates and "Angry Birds" games are already leaving people with a sense of information overload. But at least you can put your smartphone away. Having all that in front of your eyes could become too much.

"Sometimes you want to stop and smell the roses," said Scott Steinberg, CEO of technology consulting company TechSavvy Global. "It doesn't mean you want to call up every single fact about them on the Internet."

Still, it doesn't take much to imagine the possibilities. What if you could instantly see the Facebook profile of the person sitting next to you on the bus? Read the ingredient list and calorie count of a sandwich by looking at it? Snap a photo with a blink? Look through your wall to find out where electrical leads are, so you know where to drill?

"Not paint your house, because the people who looked at your house could see whatever color they wanted it in?" pondered veteran technology analyst Rob Enderle.

Wearing the glasses could turn the Internet into a tool in the same way that our memory is a tool now, mused science fiction writer and computer scientist Vernor Vinge. His 2007 book, "Rainbow's End," set in the not-so-distant future, has people interacting with the world through their contact lenses, as if they had a smart phone embedded in their eyes.

Unlike Google's glasses, at least in their current state, Vinge's lenses know what you are looking at and can augment your reality based on that. That could come next, though.

"Things we used to think were magic, we now take for granted: the ability to get a map instantly, to find information quickly and easily, to choose any video from millions on YouTube rather than just a few TV channels," wrote Google CEO Larry Page in a letter posted on the company's website Thursday.

In Google's video, a guy wearing the spectacles is shown getting subway information, arranging to meet a friend for coffee and navigating the inside of a bookstore, all with the help of the glasses. It ends with him playing the ukulele for a woman and showing her the sunset through a video chat.

Google posted the video and short blog post about Project Glass on Wednesday, asking people to offer feedback through its Google Plus social network.

By Thursday, about 500 people did, voicing a mix of amazement and concern about the new technology. What if people used it in cars and got distracted? What about the effect on your vision of having a screen so close to your eye?

Some asked for prototypes, but Google isn't giving those out just yet. The company didn't say when regular people can expect to get their hands on a piece of Project Glass, but going by how quickly Google tends to come out with new products, it may not be long. Enderle estimates it could be about six months to a year before broader tests are coming, and a year or more for the first version of the product.

With such an immersive device as this, that sort of speed could be dangerous, he cautions.

"It's coming. Whether Google is going to do it or someone else is going to do it, it's going to happen," Enderle said. "The question is whether we'll be ready, and given history we probably won't be. As a race we tend to be somewhat suicidal with regard to how we implement this stuff."