Obama Believes Women Should Be Admitted to Augusta Golf Club 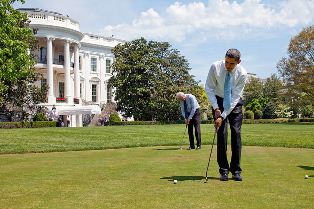 White House press secretary Jay Carney told reporters Thursday that Obama's "personal opinion is that women should be admitted" to the golf club. Carney said it was "up to the club to decide" but Obama told him he personally thinks women should be welcome.

"We're kind of long past the time when women should be excluded from anything," Carney said.

One of the club's longtime sponsors, IBM, has a new female CEO, Virginia Rometty. The last four CEOs at IBM, all male, have been invited to be members.

The chairman of Augusta National this week has said the club will decide for itself whom to allow in its ranks.