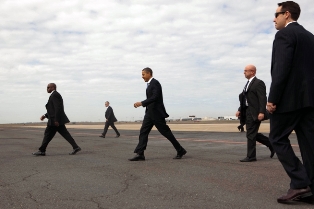 WASHINGTON (AP) -- President Barack Obama said Tuesday Republicans want to enforce a "radical vision" on the nation, accusing the opposition party of moving so far to the right that even one of its beloved figures, Ronald Reagan, could not win a Republican presidential primary today.

In a blistering election-year critique, Obama sought to present himself to voters as the protector of the middle class and the leader of a Democratic Party that is willing to compromise in Washington. He singled out the front-runner for the GOP presidential nomination, Mitt Romney, for criticism and more broadly said Republicans had shifted from any reasonable debate on health care, debt reduction and the environment.

Republicans "will brook no compromise," Obama told news executives at the annual meeting of The Associated Press.

He cited a Republican presidential debate late last year when the entire field rejected the prospect of $10 in spending cuts for every $1 in tax increases as a means to lower the debt.

"Think about that. Ronald Reagan, who as I recall was not accused of being a tax-and-spend socialist, understood repeatedly that when the deficit started to get out of control that for him to make a deal he would have to propose both spending cuts and tax increases," Obama said. "He did it multiple times. He could not get through a Republican primary today."

Making his case for re-election, Obama said nation must restore a sense of security for hard-working Americans and stand for a government willing to help those in hard times. The Democratic president blasted Republicans by name and said the choice between the parties is "unambiguously clear."

Stirring anew the themes of his State of the Union speech, Obama said the central issue for the country is deciding whether it wants to give everyone a fair chance - with government as a tool to help do that - or whether it is content to let only the wealthy succeed.

Obama used his speech to paint his Republican rivals as protectors of a trickle-down economic philosophy that does not work. He spoke on the day that GOP presidential front-runner Romney was expected to move closer to seizing his party's nomination as voters went to the polls in Wisconsin, Maryland and the District of Columbia.

Obama directly challenged Romney for embracing a $3.5 trillion budget proposal led by Rep. Paul Ryan of Wisconsin that was approved by the House last week. Ryan's proposal aims to slash the federal deficit and reduce the size of government. It stands little chance in the Democratic-controlled Senate, yet Obama targeted it as a symbol of the Republican vision.

The president said that instead of moderating their views even slightly, the Republicans running Congress have "doubled down" and proposed a budget so far to the right it makes the "Contract With America" look like the "New Deal."

The Contract with America was the policy document that helped Republicans win the House in 1994 and propelled Newt Gingrich into the speakership. The New Deal was President Franklin Roosevelt's plan for pulling the nation out of the Great Depression.

Yet Obama also sought to buffer himself from criticism that he is a supporter of big government.

Speaking to publishers and editors, Obama said: "I believe deeply that the free market is the greatest force for economic progress in human history."

Obama went into a lengthy, point-by-point critique of the Ryan budget, showing what he said would be a perilous future for senior citizens, college students, people with disabilities and many other Americans. He condemned the GOP plan as a "prescription for decline."

"It's antithetical to our entire history as a land of opportunity and upward mobility for everybody who's willing to work for it, a place where prosperity doesn't trickle down from the top but grows outward from the heart of the middle class," he said.