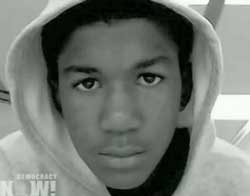 MIAMI (AP) -- The funeral director who oversaw slain Florida teenager Trayvon Martin's burial says he saw no signs of a fight on the body.

Richard Kurtz says he prepared the body for interment and saw no marks on Martin's hands, face or body other than the gunshot wound that killed him.

The 17-year-old Martin was killed Feb. 26 by neighborhood watch volunteer George Zimmerman in the city of Sanford, where Martin was visiting. Zimmerman has claimed self-defense and says Martin attacked and beat him.

The results of an autopsy have not been released while the death remains under investigation by state and federal authorities.

Zimmerman has not been charged, leading to racially-tinged protests around the country. Martin was black; Zimmerman's father is white and his mother Hispanic.