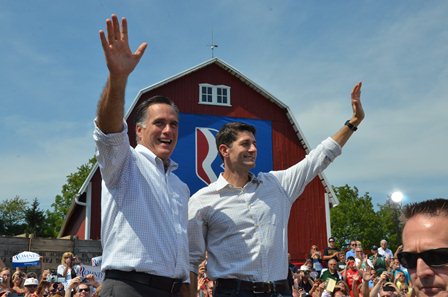 WASHINGTON (AP) -- The new debt-slashing budget plan pushed by House Republicans heated up as a presidential campaign issue Sunday as the proposal's architect, Rep. Paul Ryan of Wisconsin, at left, sparred with top Democrats over its political fallout and downplayed the possibility he could be tapped as a vice presidential candidate.

Senior White House adviser David Plouffe dismissed the GOP plan Sunday as "a lot of candy, not a lot of vegetables," and charged that it would be "rubber-stamped" as law if leading Republican presidential hopeful Mitt Romney is elected.

"This is really the Romney-Ryan plan," Plouffe said, adding that its mix of across-the-board tax cuts and stiff budget cuts "showers huge tax cuts on millionaires and billionaires paid for by senior and veterans."

Ryan tried to tamp down speculation that he could be tapped for the No. 2 spot on the GOP ticket, although who will be the nominee is far from settled.

"I would have to consider it, but it's not something I'm even thinking about right now because right - I think our job in Congress is pretty important," Ryan said. "And what we believe we owe the country is, if we don't like the direction the president is taking us, which we don't, we owe them a specific sharp contrast and a different path that they can select in November. And doing this in Congress is really important."

The House GOP debt-reduction plan, unveiled last week with minimal Democratic congressional support, is quickly sharpening as a line of division for the fall campaign, pitting GOP and tea party pressure for a reined-in budget against White House and Democratic party alarms about a weakened Medicare system and tax relief for the wealthy.

"This is a sharp, clear difference with two different futures," Ryan said. Despite growing signs that the U.S economy is struggling back to life, Ryan threw down a marker for the fall national election, saying that the GOP plan is the only alternative to a looming debt crisis versus Obama's "path of debt and decline."

The GOP proposal - endorsed by Romney last week during a meeting with GOP congressional leaders - would slice $5.3 trillion from President Barack Obama's budget over the coming decade through tax reforms and sweeping program cuts. The plan aims to shrink U.S. deficits by $3.1 trillion over the next decade, reducing tax burdens while cutting Medicaid payments and shifting oversight to states and sharply cutting other domestic programs.

House Budget Committee chairman Ryan, who authored a similar plan last year sunk by White House and Democratic congressional opposition, agreed that Romney backed his plan generally. But he said the former Massachusetts governor might not be in complete lockstep with his vision.

"I'm not expecting everyone to enact every little piece," Ryan said, adding that he expects Romney will back the plan's main planks.

Sen. Charles Schumer, D-N.Y., cautioned that his party would blunt the Ryan plan again as it did last year, also noting the election year "contrast with Democrats." He said Senate Democrats would offer up a rival tax reform plan on tax day, April 15, calling for increased taxes on wealthy Americans along the lines of the "Buffett Rule" acclaimed by billionaire Nebraska investor Warren Buffett.

"Let's be fair, you should pay more than your secretary," Schumer said, echoing Buffett's complaint that the current tax system allows the megarich to pay at lower tax rates than many of those who work for them.

Ryan and Plouffe spoke on "Fox News Sunday," while Ryan and Schumer went on CBS' "Face the Nation."