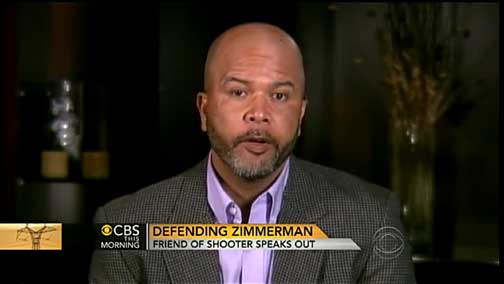 MIAMI (AP) -- A man identified as a friend of the Florida neighborhood watch captain who fatally shot an unarmed black teenager said Monday the man would tell the teen's parents he's "very, very sorry" if he could.

Speaking on ABC's "Good Morning America," Joe Oliver said George Zimmerman is not a racist and has virtually lost his own life since the shooting.

"This is a guy who thought he was doing the right thing at the time and it's turned out horribly wrong," Oliver said.

On NBC's "Today" show, Oliver said he had spoken with Zimmerman's mother-in-law, who said Zimmerman was remorseful.

"I learned that he couldn't stop crying for days after the shooting," Oliver said.

Both Oliver and Craig Sooner, an attorney speaking for Zimmerman, said there is other evidence that hasn't come out that shows Zimmerman was acting in self-defense when he shot and killed 17-year-old Trayvon Martin in February.

The shooting in a gated community near Orlando has sparked widespread outrage, with many calling for Zimmerman's arrest.

Martin was returning to his father's fiancee's home from a convenience store when Zimmerman, 28, started following him, telling police dispatchers he looked suspicious. At some point, the two got into a fight and Zimmerman pulled out his gun.

Zimmerman's father is white and his mother is Hispanic.