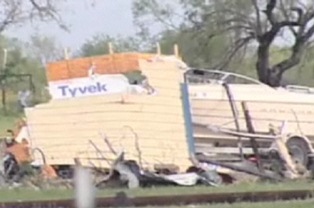 OKLAHOMA CITY (AP) -- Storms shuffled through parts of the south-central United States again Tuesday, bringing more heavy rain, damaging winds and thunder so loud some people in Oklahoma mistook it for an earthquake.

Forecasters said the slow-moving storm system that socked the region Monday could cause more flash floods, hail, strong winds and possibly tornadoes in a corridor stretching from Texas east to Louisiana and as far north as Missouri.

The National Weather Service issued tornado watches for parts of Arkansas, Texas and Louisiana, though the watch in the latter states expired by Tuesday evening. Two tornadoes in the San Antonio area injured at least eight people and damaged about 30 buildings Monday. A twister injured four people and damaged homes near North Platte, Neb., on Sunday.

In central Arkansas, strong winds Tuesday afternoon caused extensive damage in the town of Morrilton and contributed to at least one injury when a tree fell on a home, authorities said.

"Anytime a tree falls on a house, someone is going to get hurt, but no one went to the hospital by ambulance," deputy emergency manager Brandon Baker said, adding that "we have lots of houses with trees right through them."

The city parks complex was destroyed along with the concession stand and exhibit buildings at the Conway County Fairgrounds, Baker said.

In Baxter County, volunteer firefighters helped evacuate people who were trapped when a severe storm damaged their mobile homes in Midway, the sheriff's office said. All residents at the Country Life Mobile Home Park along Arkansas Highway 5 were accounted for and no injuries were reported, Sheriff John Montgomery said.

One mobile home was overturned and trees fell on three mobile homes, causing the roofs to collapse, officials said.

Tornado warnings were issued in eight Arkansas counties, but no tornadoes were immediately confirmed. A home, two barns and trees were damaged in Stone and Van Buren counties, but no injuries were reported.

Officials in southeast Kansas closed several bridges, and workers in Missouri shut down a rural roadway after rain sparked flash flooding there. In Arkansas and Oklahoma, the Forest Service has closed campsites in low-lying areas to avoid another catastrophe like the flash flood that killed 20 people at a remote campground in 2010.

Storms rattled Tulsa, Okla., early Tuesday morning with thunder so strong that it registered on seismic equipment. Meteorologist Pete Snyder felt his home shake and several concerned residents called the National Weather Service to ask if there had been an earthquake.

"We have seen quite a bit of thunder on all of our seismic stations across the state," said Austin Holland, a research seismologist with the Oklahoma Geological Survey. "We can confidently say there were no earthquakes large enough to be widely felt."

Forecasters in Tulsa said the storms have dropped between 3 and 5 inches of rain in parts of eastern Oklahoma since the storms began late Sunday night. More rain was expected there and in neighboring Arkansas.

The storms are expected to stick around for the next few days and then peter out as they meander east, said Jared Guyer, a meteorologist with the weather service's Storm Prediction Center in Norman, Okla.

Nuss reported from Little Rock, Ark. Follow her at http://twitter.com/jeannienuss