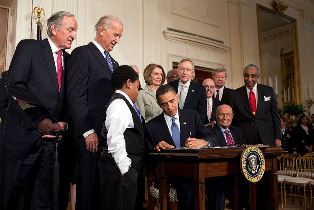 WASHINGTON (AP) -- The Supreme Court has several options in ruling on President Barack Obama's health care overhaul, from upholding the law to striking it down in its entirety. The court also could avoid deciding the law's constitutionality at all, if it finds the lawsuits challenging the law are premature.

Here is a look at six potential outcomes, from the simplest to the most complicated possible rulings:

Q. What if the Supreme Court upholds the law and finds Congress was within its authority to require most people to have health insurance or pay a penalty?

A. A decision in favor of the law would end the legal fight and allow the administration to push forward with implementing its provisions over the next few years, including the insurance requirement, an expansion of Medicaid and a ban on private insurers' denying coverage to people with pre-existing health problems.

The political wrangling, however, probably would continue as Republican candidates for president and lesser offices are calling for repeal of the law.

Q. What if, on the other hand, the court strikes down the entire law?

A. That would kill a costly new federal entitlement before it has a chance to take root and develop a constituency of beneficiaries and supporters, namely more than 30 million people who are supposed to wind up with health insurance because of the law.

In addition, some parts of the law already are in effect and would be rolled back. One popular provision allowing young adults to stay on their parents' insurance until age 26 has added nearly 2.5 million people to the coverage rolls, at no cost to taxpayers.

But there's no escaping America's double-barreled problem of excruciatingly high health care costs and many uninsured people, more than 50 million according to the latest estimates.

Whether it's dealing with the federal deficit, retirement security for seniors or even the Pentagon budget, elected officials would still have to confront health care at nearly every turn.

Congress would get to roll the ball up the hill again.

Q. What happens if the court strikes down the individual insurance requirement, but leaves the rest of the Affordable Care Act in place?

A. Knocking out the requirement that Americans carry insurance would not be the end of Obama's health care overhaul. There's a lot more in the 900-plus pages of the law.

But it would make the complicated legislation a lot harder to carry out, risking more complications for a U.S. health care system already seen as wasteful, unaffordable and unable to deliver consistently high quality.

Many fewer uninsured people would get covered. Ten million to 15 million people intended to get coverage under the law could be left out.

The cost of individually purchased private health insurance would jump. That would make it more expensive for the government to subsidize premiums, although millions of middle-class people would still be entitled to such assistance under the law's remaining provisions.

And a host of other mandates would stay in place. Starting in 2014, medium-sized and large employers would be hit with fines for not providing coverage to their workers.

Insurance companies would be required to accept people with pre-existing medical problems, no longer allowed to cherry-pick the healthy to keep costs down. They would also be forbidden from imposing higher premiums on people in poor health, and limited in what they could charge older adults.

If that happens, premiums in the individual health insurance market would jump anywhere from 10 percent to 30 percent, according to various forecasts from economists.

Experts debate whether or not such a cost spike would trigger the collapse of the insurance market for individuals and small businesses - or just make coverage even more expensive than it already is.

"Without a mandate the law is a lot less effective," said MIT economist Jonathan Gruber, who advised the Obama administration and, earlier on, then-Massachusetts Gov. Mitt Romney, who put such an insurance mandate in that state's health care law. "The market will not collapse, but it will be a ton more expensive and cover many fewer people."

Q. What if the court strikes down the mandate, and invalidates the parts of the law that require insurance companies to cover people regardless of medical problems and limit what they can charge older people?

A. Many fewer people would get covered, but the health insurance industry would avoid a dire financial hit.

Insurers would be able to keep screening out people with a history of medical problems, such as diabetes patients or cancer survivors.

That would prevent a sudden jump in premiums. But it would leave consumers with no assurance that they can get health insurance when they need it, a major problem the law was intended to fix. Other economically developed countries guarantee health insurance for their citizens.

A related requirement limits premiums charged to older adults. Currently people in their late 50s and early 60s can face premiums as much as six or seven times higher than those charged to 20-year-olds. The law says insurers may charge older adults no more than three times what they charge younger ones.

Administration lawyers say the insurance requirement goes hand in hand with the coverage guarantee and cap on premiums, and have asked the court to get rid of both if it finds the mandate to be unconstitutional.

Q. What happens if the court throws out only the expansion of the Medicaid program?

The law would effectively bring under Medicaid everyone making up to 138 percent of the federal poverty level. That works out to about $15,400 for an individual, $30,650 for a family of four. Most of those who would be added to the Medicaid rolls are low-income adults without children.

But a potentially sizable number of those low-income people might still be eligible for government-subsidized - though probably more expensive - private insurance under other provisions of the law. Private coverage will probably be more expensive for taxpayers to subsidize than Medicaid.

States suing to overturn the federal law argue that the Medicaid expansion comes with so many strings attached it amounts to an unconstitutional power grab by Washington, reaching directly into the wallets of state taxpayers.

The administration counters that the federal government is paying all of the initial cost of the expansion, and 90 percent in perpetuity, well above what Washington contributes for regular Medicaid. Moreover, when Congress created Medicaid in 1965 it also served notice on the states that program rules could change in the future. This is only the latest of many such changes.

The Supreme Court took on this issue even though none of the district or appeals courts that heard health care lawsuits had any problem with the Medicaid expansion.

"We don't have any lower court that has struck down this (Medicaid) provision, so there is no precedent from the lower courts on how to handle it," said Diane Rowland, a Medicaid expert with the nonpartisan Kaiser Family Foundation. "They all upheld it."

Q. What happens if the court decides that the constitutional challenge is premature?

A. The wild card, and least conclusive outcome in the case, involves the court's consideration of a technical issue. The federal appeals court in Richmond, Va., held that the challenge to the insurance requirement has to wait until people start paying the penalty for not purchasing insurance. The appeals court said it was bound by the federal Anti-Injunction Act, which is intended to facilitate tax collections and keep the government operating. That law says federal courts may not hear challenges to taxes, or anything that looks like a tax, until after they are paid.

Both the challengers and the administration have urged the justices to decide the constitutional issues now. But if the court were to take this path, most of the six hours of argument time, thousands of pages of legal briefs and ample legal fees devoted to this case would be wasted.

Although the administration says it doesn't want this result, such a decision would allow it to continue putting the law in place and force postponement of any subsequent challenge until more of the benefits are being received. On the other hand, Republicans might have more ammunition to press for repeal of the law in the meantime.