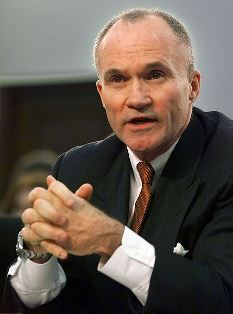 In sometimes heated exchanges with council members at a budget hearing, Kelly defended his department's counterterrorism surveillance program as well as another crime-fighting policy, the stopping, questioning and frisking of people on the street.

"I don't know what more you would want," Kelly said.

Some council members say they are deeply concerned by a series of stories by The Associated Press detailing the extent of the surveillance program, which overwhelmingly targeted Muslim ethnic groups in its hunt for suspicious activity.

Undercover police officers eavesdropped in cafes and grocery stores, infiltrated Muslim student groups and monitored the public Internet activity of people as far away as Buffalo, N.Y. They set up a command center in New Brunswick, N.J., without the knowledge of the FBI or local police. They monitored people who changed their names from Arab-sounding names to more Americanized ones, created detailed catalogs of Muslim-owned businesses and recorded the license plates of worshippers at a New Jersey mosque.

Civil rights activists say they are worried about the names of innocent Americans ending up in secret police files.

Legal changes since 9/11 have left the police department's Intelligence Division with too little supervision, said Brad Lander, a Democratic council member from Brooklyn.

"We have many blind spots in our understanding of the NYPD," Lander said Thursday.

A 1985 court settlement, known as the Handschu Guidelines after the name of one of the plaintiffs, set strict time limits for investigations, imposed rules on the kinds of records police could keep and created a three-person body to oversee such investigations.

But after the 9/11 attacks, the NYPD persuaded a judge to give it more freedom. The resulting order, known as the Modified Handschu Guidelines, did away with the three-member body and most of the restrictions in 2003. Kelly said Thursday that his department "scrupulously" follows the new, more lax guidelines.

Lander and council member Jumaane Williams said they are working on a bill that would create a police inspector general with broad subpoena powers to review surveillance operations. The council members said they were studying similar posts in other cities.

Thursday's hearing sometimes grew tense, as Kelly sparred with council members over the surveillance program and the department's "stop-and-frisk" policy.

Police made a record 684,330 street stops last year, and 87 percent of those targeted were either black or Hispanic. On Thursday, Kelly said the policy was saving the lives of minorities, since they are disproportionately victims of violent crime.

Kelly also criticized the AP during the hearing, saying the news agency had never mentioned the Handschu guidelines that regulate surveillance until 14 stories into the series.

In fact, the first AP article on Aug. 24 included several paragraphs about the Handschu case, including quotes from the court files. It did not refer to the case by name.

Kelly also said that when his spokesman, Paul Browne, originally denied the existence of the police department's Demographics Unit in an AP interview last year, it was only because the unit's name had changed. The Demographics Unit is now called the Zone Assessment Unit, he said.

However, during the interview Browne specifically told the AP that no unit had ever operated, even informally, under the Demographics Unit name.

The intelligence division has 363 officers and a $60.6 million budget, according to Mayor Michael Bloomberg's latest budget proposal. That's in addition to the 114 officers in the Joint Terrorism Task Force, which works with federal agencies, and another 96 officers in the counterterrorism division.

Kelly said he plans to keep staffing at that level, despite the outbreak of pro-democracy movements in the Middle East and recent victories over Al-Qaida, such as the killing of Osama bin Laden. Kelly said the department was concerned about continuing threats out of Nigeria, Somalia and Yemen, as well "lone-wolf" extremists in the United States.

"I don't think we can lower our vigilance." Kelly said. "We don't see any diminishment of that threat."