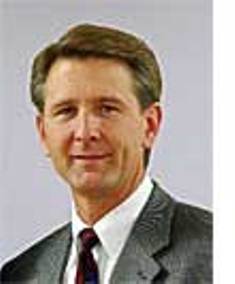 CLOVIS, N.M. (AP) -- A former New Mexico mayor who called President Barack Obama "the carnal manifestation of evil" and said Obama's election was part of a CIA conspiracy has been elected to his former job, according to unofficial results.

Lansford, 53, recently gained national attention after the newspaper reported his ties to a fringe religious and political group, ATLAH Media Network in New York. After threatening to withdraw from the race, Lansford later changed his mind and stayed in the race but said he felt disclosing his activities was unfair and would prompt others to label him "a whack job."

Lansford participated in ATLAH's mock treason trial of Obama and wrote articles for its online publication, calling Obama an illegitimate president under the Constitution and "the carnal manifestation of evil," claiming Obama's election was part of a CIA conspiracy.

Lansford later told KOB-TV that he didn't believe Obama had the legal right to be president because he's "not a natural born citizen."

ATLAH Media Network has come under fire from the Southern Poverty Law Center who posted details of the group's trial on the center's "Hatewatch" blog." ATLAH's leader, James David Manning, on various YouTube videos, also has blasted Obama for wanting turn America into an "Islamic Caliphate" and has compared him to a pimp.

"I think everybody in this country has their opinions," Lansford said on Tuesday night after winning his race. "And I think the great thing is America is where you can freely express your opinions."

Lansford also said he doesn't believe his views on the president will affect federal funding needed to complete the estimated $500 million Ute Water Project - a plan to pipe water from the Ute Reservoir in Quay County to Clovis, Portales and other communities.

Cannon Air Force Base also is located next to Clovis.

Brumfield said she was surprised that someone with Lansford's extreme views of the president managed such a large margin of votes. She added, however, that she wouldn't have done anything differently.

"I guess," said Brumfield, "the city made their choice."

The city clerk said Lansford will be sworn in Monday.

The eastern New Mexico city of 38,000 is located along the Texas border.