Super Tuesday Voters Have Their Say in GOP Race 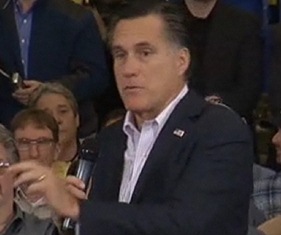 ATLANTA (AP) -- Mitt Romney is angling to solidify his front-runner status and Rick Santorum to keep it a two-man race as voters in 10 states put Super Tuesday's imprint on the Republican presidential contest. Newt Gingrich just hopes to keep his struggling campaign alive with a strong showing in Georgia.

With Ohio looming large in the Super Tuesday lineup, textbook editor Heather Froelich outside Columbus gave her vote to Romney, saying: "He understands the economy."

Enthusiasm was in short supply among some of those casting ballots.

Gingrich got a reluctant vote from Tricia Tetrault, in Edmond, Okla., where she explained her decision this way: "Ronald Reagan wasn't available any more. What can I say?"

Santorum got the support of contractor Matt Howells in suburban Cleveland, but Howells didn't expect his ballot would count for much.

"I really don't see a Republican winning the White House," he said.

With 419 delegates at stake around the country, Tuesday's voting represents a sizable slice of the 1,144 needed to nail down the GOP nomination.

Romney, who turned back Santorum in a close contest in Michigan last week, hoped to continue his winning trend. He has won four consecutive contests, including Saturday's Washington caucuses.

The GOP front-runner, trying to keep his focus on President Barack Obama, used a speech Tuesday before the American Israel Public Affairs Committee to argue he'd be more effective at containing Iran's nuclear ambitions. Santorum and Gingrich, too, addressed the committee and faulted the president's record on Iran and the Mideast.

The president, for his part, showed he had no intention of ceding the spotlight to his GOP challengers: He scheduled his first full news conference of the year for Tuesday afternoon. The president was announcing a new program to address the housing crisis, part of his ongoing effort to show he's working aggressively to help the economy recover.

Priorities USA Action, a super PAC backing the president, trained its criticism solely on Romney, issuing a "Super Tuesday memo" arguing that the front-runner's "agenda for the wealthy" was hurting him with those who are not.

After falling behind Santorum in Ohio last month, Romney closed the gap in recent days, with polls showing the race a dead heat on the eve of the primary. It's a familiar trend for Romney, whose superior fundraising and turnout operation have helped him turn deficits in Florida and Michigan into triumphs.

As the polls opened, a super PAC that supports Romney bought time for television commercials in Illinois and Louisiana, which hold primaries later in the month. The group had previously begun advertising in next week's primary states of Mississippi and Alabama.

Romney, a former venture capital executive, kept his campaign's focus on the economy in a final sprint across Ohio, where he and Santorum are competing most fiercely.

The New Englander in the race, Romney is expected to do well in the Vermont and Massachusetts primaries. He is also poised to win the Virginia primary.

Besides Ohio, Santorum is competing most aggressively in primaries in Oklahoma and Tennessee, where the GOP's conservative hue matches the strict social conservative's evangelical appeal. He was leading narrowly in Tennessee, where polls showed Gingrich and Romney closing.

Despite signs that Gingrich planned to remain in the race, Santorum urged voters in Ohio to see it as increasingly a two-candidate fight.

"I'm excited that we're here with the opportunity of winning states on Super Tuesday ... and, hopefully, eventually, having the opportunity to go one on one at the end of this thing and see where this race really falls out," Santorum told supporters in Miamisville, Ohio. "And when we do, we'll win."

Gingrich has won only one state - the Jan. 21 South Carolina primary - and was projected to win only Georgia out of the 10 states voting Tuesday. He began advertising in Tennessee on Monday, putting down just $35,000 for television time, a small purchase.

Still, Gingrich tried to cast a likely win in Georgia as a sign of momentum, comparing it to Romney's narrow win in his native Michigan over Santorum last week.

At a breakfast meeting of a suburban Atlanta chamber of commerce, Gingrich criticized his rivals as mere managers, rather than leaders of the change he recommends.

"The truth is I have opponents who are, in a normal period, adequate," he told more than 100 in Gwinnett, Ga. "But they don't have anything on the scale of change I just described to you."

At a polling place in Fayetteville, Ga., businessman Glenn Valencia sized up Gingrich as a hometown guy with great intellect but gave his vote nonetheless to Romney, saying Gingrich had "a lot of baggage" and might not hold up well against Obama.

Rep. Ron Paul of Texas was focusing on Tuesday's caucuses in Alaska, Idaho and North Dakota.

Despite the big chunk of votes being cast Tuesday, the race was expected to continue further into March because delegates are apportioned based on vote percentage and the candidates are focusing on different regions of the country.