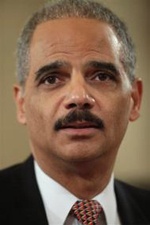 WASHINGTON (AP) -- Attorney General Eric Holder said Monday that the decision to kill a U.S. citizen living abroad who poses a terrorist threat "is among the gravest that government leaders can face," but justified lethal action as legal and sometimes necessary in the war on terror.

Holder's comments broke the administration's silence on the legal justifications for its decision to kill American-born al-Qaida operative Anwar al-Awlaki five months ago in Yemen. In a speech at Northwestern University law school in Chicago, he described al-Awlaki as concocting plans to kill Americans but he never explicitly acknowledged the administration responded by targeting the cleric for death.

Instead the attorney general outlined a three-part test for determining when a targeted killing against a U.S. citizen is legal. He said the government must determine after careful review that the citizen poses an imminent threat of violent attack against the U.S., capture is not feasible and the killing would be consistent with laws of war.

The Obama administration has refused to release the Justice Department legal opinion on al-Awlaki's killing under the Freedom of Information Act and is in court opposing efforts to have it made public.

Responding to criticism from civil libertarians, Holder flatly rejected the suggestion that the Constitution's due process protections require the president to get permission from a federal court before taking lethal action.

"The unfortunate reality is that our nation will likely continue to face terrorist threats that at times originate with our own citizens," Holder told a packed Thorne Auditorium, where all 700 seats were filled with law students, who were taking notes on their laptops; they were joined by Chicago-based federal prosecutors and other observers.

"When such individuals take up arms against this country and join al-Qaida in plotting attacks designed to kill their fellow Americans there may be only one realistic and appropriate response," the attorney general continued. "We must take steps to stop them in full accordance with the Constitution. In this hour of danger, we simply cannot afford to wait until deadly plans are carried out - and we will not."

Al-Awlaki's killing in a joint CIA-U.S. military drone strike on a convoy in Yemen sparked a public debate over whether the president should have the authority to kill an American without a conviction and despite an executive order banning assassinations - which Holder called a "loaded term" that doesn't apply in this case. Until now the Obama administration has said very little about it publicly as administration officials have debated how much to reveal in response to the criticism.

The day that al-Awlaki was killed, President Barack Obama said his death was "a major blow to al-Qaida's most active operational affiliate" and "another significant milestone in the broader effort to defeat al-Qaida." But he did not acknowledge publicly that the United States was responsible for the drone attack, which was confirmed by counterterrorism officials.

Al-Awlaki was a cleric who was born in New Mexico and once preached at an Islamic center in Falls Church, Va. His sermons in English are posted all over the Internet and his name has been associated with several attempted terrorist attacks. The Justice Department has said that a Nigerian man who tried to blow up an international flight on Christmas 2009 told FBI agents that his mission was approved after a three-day visit with al-Awlaki.

Obama administration officials told The Associated Press that Obama approved al-Awlaki's killing in April 2010, when he became the first American placed on the CIA "kill or capture" list.

"Any decision to use lethal force against a United States citizen - even one intent on murdering Americans and who has become an operational leader of al-Qaida in a foreign land - is among the gravest that government leaders can face," Holder said. "The American people can be - and deserve to be - assured that actions taken in their defense are consistent with their values and their laws."

Al-Awlaki's father sued to try to stop the government from killing his son, arguing he had to be afforded the constitutional right to due process. But U.S. District Judge John Bates in Washington refused to intervene in al-Awlaki's case because he said the courts do not have the authority to review the president's military decisions.

Holder pointed out that decision in his speech. "The Constitution guarantees due process, not judicial process," Holder said.

At least three recently filed lawsuits have sought to force the Obama administration to publicly release its legal justification for the attack, contained in a secret Justice Department memo. The Associated Press also filed a FOIA request for the memo, which was denied. The AP has appealed.

Hina Shamsi with the American Civil Liberties Union, one of the groups suing for the memo, said if Holder can discuss the targeted killing program publicly, the memo should be released and its position defended in court.

"Few things are as dangerous to American liberty as the proposition that the government should be able to kill citizens anywhere in the world on the basis of legal standards and evidence that are never submitted to a court, either before or after the fact," Shamsi said. "Anyone willing to trust President Obama with the power to secretly declare an American citizen an enemy of the state and order his extrajudicial killing should ask whether they would be willing to trust the next president with that dangerous power."

"From what we know so far, the memo is highly reminiscent of the torture memos written during the Bush administration, in which irrelevant U.S. cases and statutes are cited in order to give the CIA a green light," she said. "The relevant international law does not permit targeted killing far from battle zones."

Holder said it's "not a novel concept" to target enemy leaders for death, pointing out such attacks were made against al-Qaida's chief Osama bin Laden and during World War II, including shooting down an aircraft specifically because it was carrying Japanese Admiral Isoroku Yamamoto, leader of the attack on Pearl Harbor. He said Congress has given the president authorization to use lethal methods under a resolution passed a week after the Sept. 11 terrorist attacks that authorizes the use of all necessary force to prevent any future acts of international terrorism against the United States. He said that authority was not limited to battlefields in Afghanistan, because the nation faces a threat of terrorism from "a stateless enemy, prone to shifting operations from country to country."

"It is preferable to capture suspected terrorists where feasible - among other reasons, so that we can gather valuable intelligence from them," Holder said. "But we must also recognize that there are instances where our government has the clear authority - and, I would argue, the responsibility - to defend the United States through the appropriate and lawful use of lethal force."

Holder said that doesn't mean the administration can use military force whenever it wants and that it must respect other nations' sovereignty before acting alone on their soil. "But the use of force in foreign territory would be consistent with these international legal principles if conducted, for example, with the consent of the nation involved or after a determination that the nation is unable or unwilling to deal effectively with a threat to the United States."