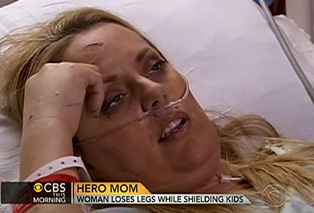 INDIANAPOLIS (AP) -- An Indiana woman who saved her two children by binding them together with a blanket and shielding them with her body as a tornado ripped apart their house lost parts of both her legs, which were crushed by the falling debris, her husband says.

Stephanie Decker, a 36-year-old sleep specialist, lost one leg above the knee and the other above the ankle, her husband said Monday. She was in serious but stable condition at a Kentucky hospital. The couple's 8-year-old son and 5-year-old daughter survived Friday's storm unscathed.

"I told her, `They're here because of you,'" Joe Decker said by telephone from the University of Louisville Hospital. "I let her know that nothing else matters. I said, `You're going to be here for your kids, and you get to see them grow up.'"

Decker, 42, was at Silver Creek High School in Sellersburg, where he teaches algebra, when the tornado hit. With storms expected, the school had been locked down, and he was debating whether to try to race home. Decker exchanged a series of texts with his wife, urging her to get herself and their children into the basement of their sprawling, three-story brick and stone home in Marysville, Ind.

"Then she sent me a text saying the whole house was shaking, and I texted her back and asked her if everything was OK," he said. "I asked her about six or seven times and got no response. That kind of freaked me out."

He said his wife told him later that she was in their walk-out basement, which had French doors leading outside and a wall of windows, when she saw the tornado approaching, moving across the family's 15-acre plot. Stephanie Decker had already tied a blanket around both children and to herself, and she threw herself on top of the children.

"She said she felt the whole house start to go, and then she felt like it moved them about before it kind of wedged her in there, but she was able to keep the kids from moving away," Decker said.

When the tornado passed, Stephanie Decker called to the children. Reese, 5, answered immediately, but Dominic, 8, hesitated before saying he was OK. Decker said his son told him he couldn't hear his mother because of the roar of the storm.

Dominic, however, soon ran across the street to seek help from neighbors, who had taken refuge in a storm cellar, Decker said. One neighbor, realizing the severity of Stephanie's injuries, ran for help and found a deputy sheriff traveling on a four-wheeler about a quarter of a mile away. The deputy applied tourniquets to Stephanie Decker's legs to halt her blood loss.

She has been scheduled to undergo surgery on her legs again Thursday, hospital spokeswoman Holly Hinson said.

"The house is gone. It's pretty amazing that she's alive," Hinson said.

With trees blocking the road after the storm, Decker said he ran part of the way home before two men gave him a ride. He found his house gone and his children with a family friend. His wife had been taken to a hospital 10 miles away, and the men drove him there, allowing him to see Stephanie briefly before she was airlifted to the Louisville hospital.

"I was afraid I might never see her again," Decker said.