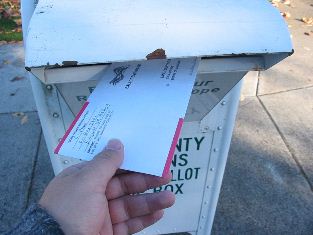 Elections officials in several states are concerned that the closing of mail-processing centers and post offices could disrupt vote-by-mail balloting this year, a potential problem that has led some members of Congress to call for a delay until after the November elections.

The U.S. Postal Service recently announced that it is moving ahead with plans to close at least 223 processing centers and thousands of post offices, adding to the 153 centers and 965 post offices that have closed since 2008. The moves are part of a wide-ranging cost-cutting strategy for an agency that estimates it will lose up to $18 billion a year by 2015.

Voting officials are raising a variety of concerns, depending on the circumstances in their states. Meanwhile, postal customers have security concerns about leaving ballots in their mailboxes to be picked up by postal carriers.

In California and Arizona, officials say the closing of processing centers could delay the delivery of mail-in ballots beyond the deadline to have them counted.

The state registrar in Ohio wrote the postmaster general with concerns about ensuring the security of ballots sent to processing centers that will be across state lines.

"We just have to have a moratorium through this presidential year to avoid disastrous consequences," said California Secretary of State Debra Bowen, who wrote a letter last week to the postmaster general urging a halt to the closures until after the November election. "I'm asking for a time-out."

In Oregon, the first state to require vote-by-mail, the state registrar says voters in rural areas where post offices are scheduled to be closed may have nowhere nearby to drop off their ballots. That would be especially problematic for those who have become accustomed to mailing them on the final weekend.

But officials dismissed concerns raised in other states, saying they're well-equipped to deal with the changes, in part because they have such extensive experience with mail voting.

The Postal Service has said the next round of facilities won't close until August, and it would then halt the process temporarily at the end of the month to minimize disruptions ahead of the general election.

The agency might begin its closures in states that already have held their primaries, Postal Service spokeswoman Patricia Licata said. She acknowledged that the consolidation will lead to longer delivery times but dismissed concerns that it could disenfranchise voters.

"We realize that election mail is vital to the country, and we don't want to do anything to disrupt that," she said.

Mindful of the concerns back home, some members of Congress say they plan to ask for another delay, after the Postal Service agreed last year to a five-month moratorium on the closures that ends in mid-May.

According to the Postal Service, once the moratorium lifts, the earliest a mail processing center could close would be August, partly because the mail agency must work to reassign employees. The first mail processing centers to be affected, which are yet to be determined, would be a handful of places involving the least difficulty in transferring employees.

Montana Sen. Jon Tester, a Democrat who sits on the committee that oversees the agency, is working to minimize the effects of the cuts. Oregon Sen. Ron Wyden said he plans to file an amendment seeking to delay the closures until after the presidential election. He said they would disproportionately affect rural voters.

"Closing these facilities carries many unintended consequences," Wyden, a Democrat, said in a statement last week. "It is not a risk worth taking."

Congress is expected to take up the overhaul of the Postal Service in the coming weeks.

Postal closures are unpopular with constituents, but spokeswoman Shannan Velayas said California's secretary of state Bowen is concerned only with the integrity of elections and that her letter to the postmaster general was not politically motivated.

While voting by mail has been mandatory in Oregon since 2000, it is growing nationwide.

One in five voters cast ballots by mail in 2010, according to the U.S. Election Assistance Commission, up from one in eight in 2004. In some states, such as Washington, ballots must be merely postmarked by Election Day to count.

In others, they must be received by the time polls close.

The Postal Service changes worry some voters, who wonder if their ballots will be delivered in time or whether they will have a convenient way to mail them.

Charles Henze, who has voted by mail in California since he first registered, said the cutbacks have him considering whether to get off the permanent absentee voter rolls this year.

Henze, 46, likes to wait until the last minute to cast his vote. Now that he may have to mail his ballot sooner, he is leaning toward voting in person at his polling place in the eastern San Francisco Bay area city of Pleasanton.

"With primaries in particular, by the time you get to voting, the situation can have changed," he said.

It's a somewhat different concern for Nancy Bowers, who lives on a farm outside Fort Rock, Ore., where the post office is under review for closure. She is worried there will not be a drop box close enough to make voting convenient.

"If they make us go somewhere else, some people may have to drive 50 miles," said Bowers, 65. "They'll consider not voting. A lot of people will."

Fort Rock, about 60 miles south of Bend in central Oregon, is nine miles from Bowers' farm. She said if the post office closes, she would have to drive at least 20 miles to drop off a ballot. For the November general election, that could mean driving in snow.

In Arizona, where more than 1 million residents voted absentee last year, election officials are advising residents to get their ballots in the mail by the Wednesday before an election. Pima County Recorder F. Ann Rodriguez said the change could have the biggest effect on residents of Indian reservations and others in rural areas who only make weekly trips to town to pick up mail.

"We're going to have to go back and educate voters," she said.

Delays are among the concerns of Ohio Secretary of State Jon Husted, who sent a letter about the processing center closures last week to the postmaster general. He expressed concern that Ohio ballots could pass through out-of-state processing centers on the way to and from voters.

"A ballot leaving the state by its very nature is a problem," Husted said in a follow-up telephone interview.

His spokesman, Matt McClellan, said the longer trip increases the risk of ballots being damaged, lost or delayed. McClellan said those concerns would be magnified in a presidential election year, when the number of voters and mail-in ballots is highest.

California poses a special problem because of its sheer size.

About 40 percent of California voters are registered for permanent absentee ballots, compared with 5 percent in 2000. Nearly 6 million residents voted by mail in 2008, the last presidential election.

The Postal Service has closed four processing centers in the state since 2008 and plans to close 14 more. Some county registrars said the closures already have had an effect.

The secretary of state said mailed ballots took from five to seven days to arrive at county election offices during last year's local elections in areas that lost distribution centers, rather than the normal one to three days.

Gail Pellerin, president of California's county clerks association, said postal cutbacks had delayed ballot delivery and were a major reason some absentee votes went uncounted last year. Pellerin said she has noticed that some voters have begun using private package companies such as FedEx to overnight their ballots.

"There's nothing worse than having to timestamp those in as too late," she said.