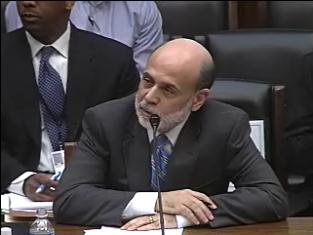 In a second day of congressional testimony, Bernanke noted that the economic recovery has been slower than normal. But he said he doubts that the Great Recession permanently reduced the economy's growth potential.

Bernanke said he did worry that more than 40 percent of America's unemployed - 5.5 million people - have been out of work for more than six months. He said that if the problem persists, more of the long-term unemployed will lose job skills and struggle to regain them.

Bernanke made his remarks to the Senate Banking Committee on the second day of his semi-annual economic report to Congress. He repeated his assessment that the pace of growth has been "uneven and modest by historical standards."

In his two days of testimony, Bernanke has signaled that the Fed is in no hurry to begin raising interest rates from record lows. Some analysts say that if the economy continues to surpass expectations, the Fed will eventually have to modify its plan to keep short-term rates at super-lows until at least late 2014.

Bernanke noted some economic improvements, including a drop in the unemployment rate to a three-year low of 8.3 percent in January. But he also cited continuing risks. They include Europe's debt crisis and higher gas prices, which Bernanke said should be temporary but could dampen consumer spending.

Many investors have been hoping that the Federal Reserve will launch a third round of bond buying to try to further lower long-term interest rates. Bernanke did not say anything to encourage those hopes. That marked a shift from a January news conference, where Bernanke had said further bond buying remained a possibility.

The Fed's two rounds of bond purchases have expanded its balance sheet to a record $2.94 trillion and raised worries among some economists about inflation risks. The Fed's balance sheet is more than triple its size in August 2008, just before the financial crisis erupted.

Bernanke defended the Fed's bond-buying programs. He noted that other central banks around the world had pursued similar policies to try to keep deep recessions from worsening.