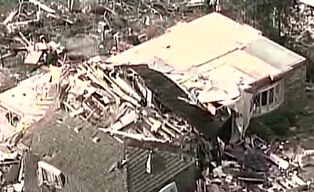 HARRISBURG, Ill. (AP) -- Crews cleared splintered plywood and smashed appliances from small-town neighborhoods Thursday, a day after tornadoes killed 13 people in the Midwest and South. But the forecast held a menacing possibility: More twisters may be coming, and they could be even stronger.

Damaged communities tried to take advantage of the brief break in the weather, mindful of one meteorologist's warning that by Friday, both regions would again be "right in the bull's eye."

Skies were sunny in the southern Illinois community of Harrisburg, where Darrell Osman was back in the rubble of his dead mother's home, trying to salvage what he could before more storms roll in. When he arrived, a neighbor handed him his mother's wallet, which the storm had deposited in a truck near her home.

If another twister hit the same area, the blow to the town would be grave, he said.

"On a personal level, I think I've been hit as hard as I can be hit, but it would be disheartening for this community," Osman said.

Then yet another system is expected to arrive Friday afternoon.

Poole says both rounds of violent weather carry the potential of more tornadoes.


The weather service planned to bring a severe-weather specialist to the region's command center to provide up-to-the-minute information before and during the storms.

Osman awoke before Wednesday's storm because he was alerted by his special weather radio. He said early warning equipment was essential.

"The peace of mind you get from it sitting on your dresser is well worth the cost," he said.

Ryan Jewell, a meteorologist with the Storm Prediction Center, said the next system is forecast to take a similar path as Wednesday's storms and has the potential for even more damage.

On Friday, he said, both the Midwest and South will be directly in the danger zone.

At least 16 tornados were reported from Nebraska and Kansas across southern Missouri to Illinois and Kentucky, according to the Storm Prediction Center in Norman, Okla., an arm of the National Weather Service.

Six people were killed in Harrisburg when blocks of homes were flattened by the storms.

In Missouri, one person was killed in a trailer park in the town of Buffalo, while two more fatalities were reported in the Cassville and Puxico areas.

A tornado also hopscotched through the main thoroughfare of the country music mecca of Branson, Mo., damaging some of the city's famous theaters just days before the start of the town's crucial tourist season.

Three people were reported killed in eastern Tennessee - two in Cumberland County and another in DeKalb County.

And in Harveyville, Kan., a man whose home collapsed on him was taken off life support Wednesday evening. An EF2 tornado with winds up to 130 mph had demolished much of the tiny community.

Some people don't take storm warnings seriously, Osman said, but "they might change their thinking now."

"I always took them seriously," he added. "I always felt those sirens were there for a reason."

The National Weather Service listed the Harrisburg tornado as an EF4, the second-highest rating given to twisters based on damage. Scientists said it was 200 yards wide with winds up to 170 mph.

Adding to the danger, it hit as many slept - a timing research meteorologist Harold Brooks called unusual but "not completely uncommon."

Brooks, with the NOAA National Severe Storms Laboratory in Norman, Okla., said perhaps 10 percent of tornadoes happen between midnight and 6 a.m., a time when the danger level rises because the storms are harder to spot and it's harder to get the word out.

"If you're asleep, you're less likely going to hear anything, any warning message on the danger," Brooks said.

That didn't appear to be the case in Harrisburg, where the mayor expressed gratitude for storm spotters he credited with saving lives.

At Harrisburg Medical Center, staffers were alerted to the tornado's approach by the sheriff's department some 20 minutes ahead of time.

"We get these calls periodically, and often it's a false alarm," said the center's CEO, Vince Ashley. "But we get them often enough that everyone knows what to do."

Nurses hustled patients into the hallways and away from windows, closing the doors behind them. They were fighting to close the last of the heavy, steel fire doors at the end of the hallway when the tornado came.

The fierce winds blew some walls off some rooms, but no one was hurt.

Some portions of the hospital were so badly damaged they will have to be completely rebuilt.

Nearby, Amanda Patrick was rousted by the sirens with about five minutes to spare.

She called Donna Rann - her neighbor and co-worker at the U.S. Forest Service - to alert her but got no answer, then thrust herself into a bathtub as the twister blasted through.

The winds shifted the tub as the walls buckled above her. In a T-shirt and pajama pants, she crawled shoeless into the rain and muck.

She called out for Donna and her husband, Randy, but heard nothing back. Both died in their duplex across the street.

Hours later, tears streamed down Patrick's face as she grieved.

"A couple weeks ago, there was a bad storm, and I looked out the window to check on them," she said, sobbing. "Donna texted me and said, `I saw you in the window.' She was checking on me. That's the way we were, always just looking out for each other."

This time, she said, "they didn't have a chance."