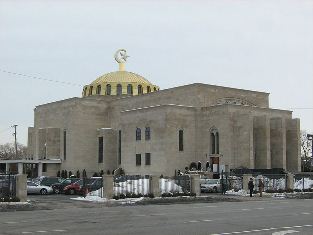 NEW YORK (AP) -- The number of American mosques has increased dramatically in the last decade despite post 9/11 protests aimed at Muslim houses of worship, according to a new study. The new Islamic centers serve Muslims who moved into the suburbs and newer immigrants from Africa, Iraq and elsewhere.

Researchers conducting the national count found a total of 2,106 Islamic centers, compared to 1,209 in 2000 and 962 in 1994. About one-quarter of the centers were built between 2000-2011, as the community faced intense scrutiny by government officials and a suspicious public. In 2010, protest against an Islamic center near ground zero erupted into a national debate over Islam, extremism and religious freedom. Anti-mosque demonstrations spread to Tennessee, California and other states.

Ihsan Bagby, a professor at the University of Kentucky and lead author of the study, said the findings show Muslims are carving out a place for themselves despite the backlash.

"This is a growing, healthy Muslim community that is well integrated into America," Bagby said. "I think that is the best message we can send to the world and the Muslim world in particular."

The report released Wednesday, "The American Mosque 2011," is a tally based on mailing lists, websites and interviews with community leaders, and a survey and interviews with 524 mosque leaders. The research is of special interest given the limited scholarship so far on Muslim houses of worship, which include a wide range of religious traditions, nationalities and languages.

Researchers defined a mosque as a Muslim organization that holds Friday congregational prayers called jumah, conducts other Islamic activities and has operational control of its building. Buildings such as hospitals and schools that have space for Friday prayer were not included. Chapters of the Muslim Student Association at colleges and universities were included only if they had space off-campus or had oversight of the building where prayer was held.

The overwhelming majority of mosques are in cities, but the number located in suburbs rose from 16 percent in 2000 to 28 percent in 2011. The Northeast once had the largest number of mosques, but Islamic centers are now concentrated in the South and West, the study found. New York still has the greatest number of Islamic centers - 257 - followed by 246 in California and 166 in Texas. Florida is fourth with 118. The shift follows the general pattern of population movement to the South and West.

The study found the ethnic makeup of mosque participants largely unchanged from 2000. South Asians comprise about one-third of participants, while Arabs and African-Americans are about one-quarter each. Bagby found a slight increase in the percentage of Muslims from West Africa and Somalia. An influx of Iraqi and Iranian refugees is behind a jump in the number of Shiite mosques since the 1990s. Shiites still represent a very small percentage of the U.S. Muslim population.

The study's authors did not ask specifics of how each community funded mosque construction. After Muslims started arriving in the United States in large numbers in the 1960s, due to a change in American immigration rules, it was common for Saudi Arabia, Iran and other Muslim nations to build U.S. mosques. However, increasing federal restrictions on foreign funds slowed some mosque construction before and after 9/11. Before the attacks, some American Muslim communities began refusing overseas funding even from individual donors as a sign of independence from overseas influence. Now American Muslim communities, which include many wealthy professionals, largely fund construction on their own, scholars say.

Estimates of the total American Muslim population have become a contentious issue as Muslims seek to have a voice in public life. The U.S. Census does not ask about religion. Pew conducted a survey last year that estimated the American Muslim community encompassed 2.75 million people, or nearly 1 percent of the U.S. population, a finding similar to that of other recent surveys. Bagby's 2000 report had estimated the U.S. Muslim population to be as high as 7 million, a number widely criticized as inflated. In this latest report, Bagby did not report a definitive population number, but stood by his earlier assertion that the United States could be home to as many 7 million Muslims.

Each congregation reported an average of around 15 converts to Islam annually, a figure that has held steady. Latinos jumped from 7 percent of all reported converts in 2000 to 12 percent in 2011, while the percentage of white converts dropped slightly. In findings similar to those in surveys conducted by Pew Research Center and Gallup, nearly all respondents said they supported Muslim involvement in American society and politics.

The 2011 mosque study is part of the Faith Communities Today partnership, which researches the more than 300,000 houses of worship in the United States. Among the report's sponsors are the Council on American-Islamic Relations, the Hartford Institute for Religion Research, the Islamic Society of North America and Islamic Circle of North America.