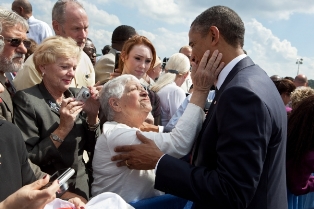 WASHINGTON (AP) -- It's looking like President Barack Obama may be back in the good graces of women.

His support dropped among this critical constituency just before the new year began and the presidential campaign got under way in earnest. But his standing with female voters is strengthening, polls show, as the economy improves and social issues, including birth control, become a bigger part of the nation's political discourse.

"Republicans are making a big mistake with this contraception talk, and I'm pretty sure that they are giving (the election) to Obama," says Patricia Speyerer, 87, of McComb, Miss., a GOP-leaning independent. "It's a stupid thing."

The recent furor over whether religious employers should be forced to pay for their workers' contraception is certainly a factor but hardly the only reason for women warming up to Obama again after turning away from him late last year.

An Associated Press-GfK poll suggests women also are giving the president more credit than men are for the country's economic turnaround.

Among women, his approval ratings on handling the economy and unemployment have jumped by 10 percentage points since December. Back then, a wide swath of Americans expressed anxiety over the nation's slow climb out of recession and anger at a government that couldn't agree on steps to speed things up.

Since then, the unemployment rate has kept declining, and Obama hasn't been shy about trumpeting it, and analysts say that drop may have resonated particularly with women.

For Obama, there is no more crucial constituency than women. They make up a majority of voters in presidential elections, and a bit more of them identify with his party. He would not be president today without topping Republican John McCain in that group in 2008. And Republicans would need to win a sizable share - more than about 40 percent - of female voters to beat him.

Though the economy remains the top concern among both women and men, an array of social issues - gay marriage, access to birth control and whether cancer research should be kept separate from the issue of abortion- have returned to the nation's political conversation since December. And both parties have snapped up those issues to awaken their staunchest supporters.

Republicans from Capitol Hill to the presidential campaign trail focused particularly on a requirement in Obama's health care law for some religious employers to pay for birth control. Obama then adjusted that policy by instead directing insurance companies to pay for birth control - and Democrats are running with a message that Republicans want to upend long-established rights for women.

"Women are used to making decisions and running their lives," said Linda Young, president of the National Women's Political Caucus, which favors abortion rights. "To hear their right to contraception questioned in 2012 is shocking, and it's gotten a lot of people's attention."

Republicans say the economy will again overtake that discussion and it will be clear the GOP offers families more once Republicans choose a nominee, turn their fire from each other to Obama and make their case on issues such as gas prices and the deficit.

"The economic indicators, we have to admit, are very slowly improving, and that is something that has always affected the female vote," said Rae Lynne Chornenky, president of the National Federation of Republican Women. "Until we get a candidate I don't think the full story can be told."

"People in both political parties are keeping this (cultural narrative) alive because they're trying to excite their bases," said Republican Brian Flaherty, who served as a Connecticut legislator for 15 years. "You can afford to have this attention in February on" reproductive issues.

An AP-GfK poll conducted Feb. 16-20 showed that on overall approval Obama has gained 10 percentage points among women since December, from 43 percent to 53 percent, even though his administration seemed to stumble over whether religious employers should be forced to pay for contraception.

Women also are the reason behind Obama's lead over Republican hopefuls Mitt Romney and Rick Santorum: In one-on-one matchups, Obama beats Romney 54 percent to 41 percent and tops Santorum 56 percent to 40 percent among women, but virtually ties each Republican among men. Women are Obama's to lose: They are more apt to identify with Democrats and give that party higher favorability than are men.

Over time, there hasn't been much shift in women's views of the Democratic Party, but views of the GOP have become more polarized since the AP last asked about the issue in January 2011. Thirty-nine percent of Republican women hold a "very favorable" view of the party, compared with 27 percent a year ago. At the same time, 57 percent of Democratic women now give the GOP a deeply unfavorable rating, the first time that figure has topped 50 percent.

Republicans insist their objections to Obama's policy on birth control coverage are about government infringing on the freedom of religion, not about contraception, which is supported by a broad majority of Americans.

But Santorum also says, as he has for years, that contraception conflicts with his Roman Catholic beliefs.

"Well, I'm a Roman Catholic, too," said Speyerer. She recalls that in 1940s New Orleans, where she was born and married, it was illegal to publish anything about birth control, "and I don't want to see that happen again."

Democrats already have sought to capitalize on that sentiment, holding a faux hearing last week with a single woman denied the chance to testify about contraception to a Republican-controlled House committee.

There will be more of that this week. Senate Democrats have agreed to debate a measure by Republican Sen. Roy Blunt of Missouri that would allow health plans to deny coverage for any service that violates the sponsor's beliefs. And on Thursday, a coalition of women's groups called HERvotes is holding a news conference in Washington to protest the renewed questioning of long-established rights for women.

The AP-GfK poll was conducted Feb. 16-20 by GfK Roper Public Affairs and Corporate Communications. It involved landline and cellphone interviews with 1,000 adults, including 485 women. Results from the full sample have a margin of sampling error of 4 percentage points. Among women, the margin of error is 6 points.