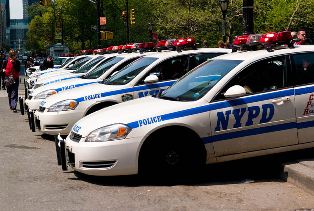 The money is part of a little-known grant intended to help law enforcement fight drug crimes. Since the terrorist attacks of Sept. 11, 2001, the Bush and Obama administrations have provided $135 million to the New York and New Jersey region through the High Intensity Drug Trafficking Area program, known as HIDTA.

Some of that money - it's unclear exactly how much because the program has little oversight - has paid for the cars that plainclothes NYPD officers used to conduct surveillance on Muslim neighborhoods. It also paid for computers that store even innocuous information about Muslim college students, mosque sermons and social events.

When NYPD Commissioner Raymond Kelly was filled in on these efforts, his briefings were prepared on HIDTA computers.

The AP confirmed the use of White House money through secret police documents and interviews with current and former city and federal officials. The AP also obtained electronic documents with digital signatures indicating they were created and saved on HIDTA computers. The HIDTA grant program is overseen by the White House Office of National Drug Control Policy.

The disclosure that the White House is at least partially paying for the NYPD's wholesale surveillance of places where Muslims eat, shop, work and pray complicates efforts by the Obama administration to stay out of the fray over New York's controversial counterterrorism programs. The administration has championed outreach to American Muslims and has said law enforcement should not put entire communities under suspicion.

The Obama administration, however, has pointedly refused to endorse or repudiate the NYPD programs it helps pay for. The White House last week declined to comment on its grant payments. It was unclear if the White House knew precisely where its grant money was going.

John Brennan, Obama's top counterterrorism adviser, last year called the NYPD's efforts "heroic" but would not elaborate. Homeland Security Secretary Janet Napolitano, whose department also gives grant money to the NYPD and is one of the lead federal agencies helping police build relationships with Muslims, has refused in recent months to discuss the police tactics. Tom Perez, the Justice Department's top civil rights lawyer, has repeatedly refused to answer questions about the NYPD.

Outside Washington, the NYPD's efforts drew increased criticism last week. College administrators at Yale, Columbia and elsewhere issued harsh rebukes for NYPD's infiltration of Muslim student groups and its monitoring of school websites. New Jersey's governor and the mayor of its largest city have complained about the NYPD's widespread surveillance there, outside New York's police jurisdiction.

The White House HIDTA grant program was established at the height of the drug war to help police fight drug gangs and unravel supply routes. It has provided about $2.3 billion to local authorities in the past decade.

After the terror attacks, law enforcement was allowed to use some of that money to fight terrorism. It's unclear how much HIDTA money has been used to pay for the intelligence division, in part because NYPD intelligence operations receive scant oversight in New York.

Congress, which approves the money for the program, is not provided with a detailed breakdown of activities. None of the NYPD's clandestine programs is cited in the New York-New Jersey region's annual reports to Congress between 2006 and 2010.

NYPD spokesman Paul Browne did not respond to questions the AP sent to him in two emails about the White House money and the department's intelligence division.

Most of the money from the White House grants in New York and New Jersey has been spent fighting drugs, said Chauncey Parker, director of the program there. He said less than $1.3 million was spent on vehicles used by the NYPD intelligence unit.

Former police officials told the AP those vehicles have been used to photograph mosques and record the license plates of worshippers.

In addition to paying for the cars, the White House money pays for part of the office space the intelligence division shares with other agencies in Manhattan.

When police compiled lists of Muslims who took new, Americanized names, they kept those records on HIDTA computer servers. That was ongoing as recently as October, city officials said.

Many NYPD intelligence officers, including those that conducted surveillance of Muslim neighborhoods, had HIDTA email addresses. Briefing documents for Kelly, the police commissioner, were compiled on HIDTA computers. Those documents described what police informants were hearing inside mosques and which academic conferences Muslim scholars attended.

When police wanted to pay a confidential informant, they were told to sign onto the HIDTA website to file the paperwork, according to a 2007 internal document obtained by the AP.

Parker said the White House grant money was never used to pay any of the NYPD intelligence division's confidential informants. The HIDTA computer systems, he said, are platforms that allow different law enforcement agencies to share information and work.

"I am shocked to hear that federal dollars may have helped finance the NYPD's misguided efforts to spy on Muslims in America," said Rep. Judy Chu, D-Calif., one of 34 members of Congress who have asked the Justice Department and House Judiciary Committee to investigate the NYPD.

The connection between NYPD and the White House anti-drug grant program surfaced years ago, during a long-running civil rights lawsuit against police. Civil rights attorneys asked in court about a "demonstration debriefing form" that police used whenever they arrested people for civil disobedience. The form carried the seal of both the NYPD Intelligence Division and HIDTA.

A city lawyer downplayed any connection. She said the NYPD and HIDTA not only shared office space, they also shared office supplies like paper. The NYPD form with the seal of a White House anti-drug program was "a recycled piece of paper that got picked up and modified," attorney Gail Donoghue told a federal judge in 2003.

The issue died in court and was never pursued further.

Last week, the controversy over NYPD's programs drew one former Obama administration official into the discussion.

After the AP revealed an extensive program to monitor Muslims in Newark, N.J., police there denied knowing anything about it. The Newark police director at the time, Garry McCarthy, has since moved on to lead Chicago's police department where President Barack Obama's first chief of staff, Rahm Emanuel, is now the mayor.

"We don't do that in Chicago and we're not going to do that," Emanuel said last week.

New Jersey Gov. Chris Christie said the NYPD surveillance in his state was "disturbing" and has asked the attorney general to investigate. Christie was New Jersey's top federal prosecutor and sat on the HIDTA executive board during 2006 and 2007 when the NYPD was conducting surveillance in New Jersey cities. Christie said he didn't know that, in 2007, the NYPD catalogued every mosque and Muslim business in Newark, the state's largest city.

"I kind of think I would have remembered that," he said on Fox Business Network last week.