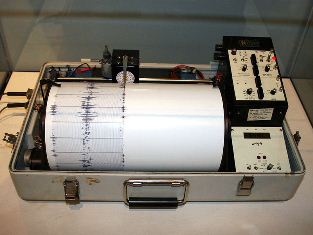 ST. LOUIS (AP) -- Just days after the 200th anniversary of a series of massive earthquakes in southeast Missouri, residents woke up Tuesday to a rumbling reminder that they live in one of the continent's most active seismic areas.

The U.S. Geological Survey said the epicenter of a magnitude 4.0 earthquake at 3:58 a.m. was located near the town of East Prairie, Mo., roughly midway between St. Louis and Memphis. Several people in five states - Missouri, Illinois, Arkansas, Kentucky and Tennessee - felt the quake, along with scattered people in four others, as far away as North Carolina and Georgia, according to responses to the U.S. Geological Survey website.

Only minor damage was reported, such as items falling from shelves, broken windows, minor cracks in walls and sidewalks, said Amy Vaughan, a geophysicist for the Geological Survey office in Golden, Colo. No injuries were reported.

"It seemed like everybody I've talked to, it woke `em up," Thurmond said.

The earthquakes on Dec. 16, 1811, and Jan. 23 and Feb. 7, 1812, were among the strongest ever in the U.S., their magnitudes estimated to have ranged from 7.7 to 8.1. Shockwaves spread as far as New York and the force of the temblors reportedly rang church bells in Boston. The Mississippi River reversed flow for a time.

Those quakes, like the one on Tuesday, occurred in the New Madrid Seismic Zone, a 150-mile stretch between Memphis and St. Louis that crosses parts of Arkansas, Illinois, Indiana, Kentucky, Missouri and Tennessee.

Most of the earthquakes that frequently hit the zone are so small that virtually no one feels them. Even a magnitude 4.0 quake is rare, occurring in the New Madrid zone on average about once a year, said Bob Herrmann, a Saint Louis University geophysicist.

"It's been a while since we had a good shaker in the New Madrid region," Herrmann said. "It is a reminder that earthquakes occur and we cannot ignore them."

Expert opinion varies on the likelihood of another big Midwestern quake along the New Madrid fault, though many communities in the region have taken precautions by retrofitting bridges and other structures.

Earthquake drills are also becoming more common. On Feb. 7, nearly 150,000 Missourians and hundreds of schools in the state participated in a drill known as the "Great Central U.S. ShakeOut."

Experts suggest that the likelihood of a magnitude 6 or greater quake occurring along the New Madrid fault within a half century is somewhere between 28 percent and 46 percent.

"Unfortunately, we cannot predict earthquakes," Herrmann said. "We can look at historical trends and say one should exercise some caution and prudence."