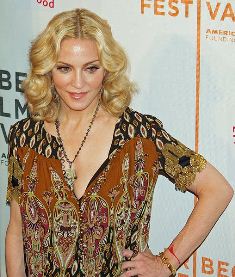 LOS ANGELES (AP) -- Police captured a man on Friday who was convicted of threatening to kill Madonna and walked away from a Los Angeles-area mental hospital last week.

He had been committed there last year and was returned to the facility after his arrest. Police didn't comment about how Hoskins escaped or where he had been over the past week.

A message left with a spokeswoman for the California Department of Mental Health was not immediately returned.

Hoskins, 54, served a 10-year prison sentence for stalking and threatening Madonna after being convicted by a jury in 1996.

The singer reluctantly testified against the man, who was shot by her personal security after he jumped the fence of her 25,000-square-foot Hollywood Hills home.

Hoskins had told the singer's assistants he would either marry Madonna or slash her throat from ear to ear.

At trial, Madonna said she felt sick to her stomach that she was in the same room as Hoskins and had nightmares about him chasing her. She said she was in Miami when she received a call, hearing that her bodyguard shot Hoskins.

"It was like a bad dream," she said then. "I couldn't believe it was actually happening and he had tried to make his threats a reality."

Police asked for the public's help Thursday in locating Hoskins. They said he is "highly psychotic" and can be extremely violent but didn't elaborate.

Court records show he was convicted of vandalism in July 2011.