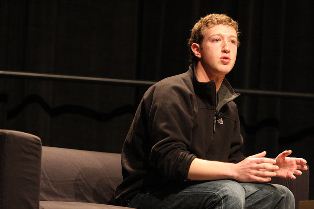 NEW YORK (AP) -- Facebook's top executives, including CEO Mark Zuckerberg, are eligible for twice-a-year bonuses of up to 45 percent of their base salaries and other earnings, according to a Wednesday regulatory filing.

Facebook Inc. said in a filing with the Securities and Exchange Commission that it will pay Zuckerberg, 27, a base salary of $500,000 per year. Zuckerberg's 45 percent target bonus will be based on his performance.

Chief Operating Officer Sheryl Sandberg will receive a base salary of $300,000. Her target bonus is also 45 percent.

David Ebersman will continue to serve as chief financial officer and he will get a base salary of $300,000.

Mike Schroepfer, Facebook's vice president of engineering, will receive a base salary of $275,000. Both he and Ebersman have a target bonus of 45 percent.

That said, the bulk of the windfall Zuckerberg and others will earn will be in the form of Facebook stock they own. The company said last week it plans to raise $5 billion in its IPO. If all goes as planned, Facebook could be worth as much as $100 billion.

Another executive, Vice President and General Counsel Theodore Ullyot, will receive a base salary of $275,000, according to the filing. He will also get a retention bonus of $400,000 per year for five years, as well as restricted stock and stock options.