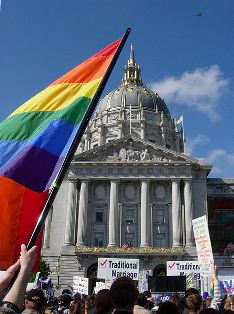 A three-judge panel of the 9th U.S. Circuit Court of Appeals ruled 2-1 that a lower court judge correctly interpreted the U.S. Constitution and Supreme Court precedents when he declared in 2010 that Proposition 8 - a response to an earlier state court decision that legalized gay marriage - was a violation of the civil rights of gays and lesbians.

However, the appeals court said gay marriages cannot resume in the state until the deadline passes for Proposition 8 sponsors to appeal to a larger panel of the 9th Circuit. If such an appeal is filed, gay marriages will remain on hold until it's resolved.

"Although the Constitution permits communities to enact most laws they believe to be desirable, it requires that there be at least a legitimate reason for the passage of a law that treats different classes of people differently. There was no such reason that Proposition 8 could have been enacted," the ruling states.

Backers of Proposition 8 said they would ask the Supreme Court to overturn the 9th Circuit ruling.

"No court should presume to redefine marriage. No court should undercut the democratic process by taking the power to preserve marriage out of the hands of the people," said Brian Raum, senior counsel for the Alliance Defense Fund, a Christian legal aid group based in Arizona that helped defend Proposition 8.

"We are not surprised that this Hollywood-orchestrated attack on marriage - tried in San Francisco - turned out this way. But we are confident that the expressed will of the American people in favor of marriage will be upheld at the Supreme Court," he said.

American Foundation for Equal Rights President Chad Griffin, who formed the group along with director Rob Reiner to wage the court fight against Proposition 8, called the panel's ruling "a historic victory."

"The message it sends to young LGBT people, not only here in California but across the country, (is) that you can't strip away a fundamental right, and gay marriage is a fundamental right that no one can strip away," Griffin said. "Now that Proposition 8 has been declared unconstitutional, the people of California will very soon be able to once again realize their freedom to marry."

More than 50 people who gathered outside the federal courthouse in downtown San Francisco greeted the ruling with cheers. They held signs and waved rainbow flags.

The appeals panel crafted a narrow decision that applies only to California, even though the court has jurisdiction in nine western states. California is the only one of those states where the ability for gays to marry was granted then rescinded.

"Whether under the Constitution same-sex couples may ever be denied the right to marry, a right that has long been enjoyed by opposite-sex couples, is an important and highly controversial question," the court said. "We need not and do not answer the broader question in this case."

The panel also said there was no evidence that former Chief U.S. Judge Vaughn Walker was biased and should have disclosed before he issued his decision that he was gay and in a long-term relationship with another man.

The ruling came more than a year after the appeals court heard arguments in the case.

Proposition 8 backers had asked the 9th Circuit to set aside Walker's ruling on both constitutional grounds and because of the thorny issue of the judge's personal life. It was the first instance of an American jurist's sexual orientation being cited as grounds for overturning a court decision.

Walker publicly revealed he was gay after he retired. However, supporters of the gay marriage ban argued that he had been obliged to previously reveal if he wanted to marry his partner - like the gay couples who sued to overturn the ban.

Walker's successor as the chief federal judge in Northern California, James Ware, rejected those claims, and the 9th Circuit held a hearing on the conflict-of-interest question in December.

California voters passed Proposition 8 with 52 percent of the vote in November 2008, five months after the state Supreme Court legalized same-sex marriage by striking down a pair of laws that had limited marriage to a man and a woman.

The ballot measure inserted the one man-one woman provision into the California Constitution, thereby overruling the court's decision. It was the first such ban to take away marriage rights from same-sex couples after they had already secured them and its passage followed the most expensive campaign on a social issue in the nation's history.

The Williams Institute on Sexual Orientation and the Law, a think tank based at the University of California, Los Angeles, has estimated that 18,000 couples tied the knot during the four-month window before Proposition 8 took effect. The California Supreme Court upheld those marriages, but ruled that voters had properly enacted the law.