By The Skanner News
Published: 06 February 2012 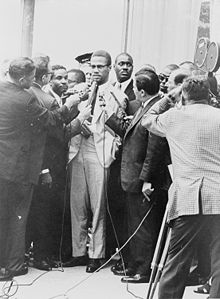 PROVIDENCE, R.I. (AP) -- The recording was forgotten, and so, too, was the odd twist of history that brought together Malcolm X and a bespectacled Ivy Leaguer fated to become one of America's top diplomats.

The audiotape of Malcolm X's 1961 address in Providence might never have surfaced at all if 22-year-old Brown University student Malcolm Burnley hadn't stumbled across a reference to it in an old student newspaper. He found the recording of the little-remembered visit gathering dust in the university archives.

"No one had listened to this in 50 years," Burnley told The Associated Press. "There aren't many recordings of him before 1962. And this is a unique speech - it's not like others he had given before."

In the May 11, 1961, speech delivered to a mostly white audience of students and some residents, Malcolm X combines blistering humor and reason to argue that blacks should not look to integrate into white society but instead must forge their own identities and culture.

At the time, Malcolm X, 35, was a loyal supporter of the black separatist movement Nation of Islam, now based in Chicago. He would be assassinated four years later after leaving the group and crafting his own more global, spiritual ideology.

The legacy of slavery and racism, he told the crowd of 800, "has made the 20 million black people in this country a dead people. Dead economically, dead mentally, dead spiritually. Dead morally and otherwise. Integration will not bring a man back from the grave."

The rediscovery of the speech could be the whole story. But Burnley found the young students in the crowd that night proved to be just as fascinating.

Malcolm X was prompted to come to Brown by an article about the growing Black Muslim movement published in the Brown Daily Herald. The article by Katharine Pierce, a young student at Pembroke College, then the women's college at Brown, was first written for a religious studies class. It caught the eye of the student paper's editor, Richard Holbrooke.

Holbrooke would become a leading American diplomat, serving as U.S. Ambassador to Germany soon after that nation's reunification, ambassador to the United Nations and President Barack Obama's special adviser on Pakistan and Afghanistan before his death in 2010 at age 69.

But in 1961, Holbrooke, 20, was eager to use the student newspaper to examine race relations - an unusual interest on an Ivy League campus with only a handful of black students.

Somehow, the article made its way to Malcolm X. His staff and Holbrooke worked out details of the visit weeks in advance. Campus officials were wary: Malcolm X had been banned from the University of California-Berkeley and Queens College in New York.

Tickets - going for 50 cents apiece - for the Brown speech sold quickly. About 800 people filled the venue, the 19th-century, Romanesque Sayles Hall, meant to hold about 500.

"He came surrounded by a security detail," she said. "You got the sense - this is an important person. He was handsome, absolutely charismatic. I was just bewildered that my class paper could have led to something like this."

In his speech, Malcolm X outlined Black Muslims' beliefs and argued that black Americans cannot wait for white Americans to offer them equality.

Richard Nurse, one of three black students in his Brown University class in 1961, came to the speech with his mind made up against Malcolm X.

"I very strongly believed in integration," Nurse said in a telephone interview from his New Jersey home. "These were ideas I had accepted, adopted. Here I was at this Ivy League university. But he confounded me a little bit. I had never heard a black man in public speak as forcefully as Malcolm X did that night. It was cataclysmic."

Nurse, now 72 and retired from teaching at Rutgers University, said the speech didn't cause him to change his views. But he said he understood Malcolm X's message better years later when, in the U.S. Army, he was barred from all-white USO clubs and movie theaters in the South.

"Now things have changed to the point where that kind of notion (separatism) is no longer even considered," he said.

Pierce said the speech exposed her and other students in the audience to a different side of America. She gives Holbrooke credit for bringing Malcolm X to campus.

Holbrooke joined the foreign service after graduation and was posted to Vietnam in 1962. He visited Pierce in Hong Kong, where she worked as a teacher. She went on to work on international refugee projects and at Yale University and now creates computer training programs.

She said she wasn't surprised when Holbrooke became the diplomat presidents dispatched to hot spots like Bosnia and Afghanistan.

"He was a very good friend," she said. "I was saddened to hear of his death, sad for myself and sad for the world."

The recording of the address is in pristine condition. Pierce obtained the tape after the event - she isn't sure who made the recording - and it sat in a box of mementos for years before she mailed it to the university archives.

Burnley has had the tape digitized and plans to air excerpts next week at an event hosted by the Rhode Island Black Heritage Association.

Lehigh University professor Saladin Ambar, who is working on a book about Malcolm X's 1964 visit to Oxford University, said any new recording of him is reason to celebrate.

"Malcolm's best speeches, they're just gone," he said. "He's not nearly as well-documented as he should be, when you consider his power as an orator."