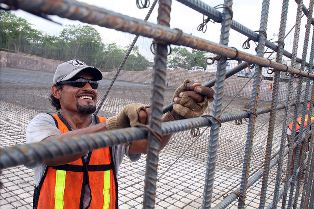 WASHINGTON (AP) -- In the most impressive surge for the job market since early last year, the United States added 243,000 jobs in January, far more than economists expected. The unemployment rate dropped to 8.3 percent, the lowest in three years.

Hiring accelerated across the economy and up and down the pay scale. The high-salary professional services industry added 70,000 jobs, the most in 10 months. Manufacturing added 50,000, the most in a year.

"This is a very positive employment report from almost any angle," said Brian Bethune, an economics professor at Amherst College.

The report could enhance President Barack Obama's hopes for re-election, which is turning on the health of the economy. The unemployment rate is the lowest since February 2009, one month after Obama took office.

Obama got a fresh talking point in the report as he works to persuade voters that his solutions for the nation's job woes are working and to give him four more years to turn the economy around completely.

His Republican foes were quick to use the new numbers to argue that the pace of change wasn't swift enough.

"We can do better," said GOP front-runner Mitt Romney, who added: "These numbers cannot hide the fact that President Obama's policies have prevented a true economic recovery."

Money poured into the stock market, already off to its best start in 15 years because of improving confidence in the economy, and out of more conservative investments in bonds.

The 243,000 jobs added far exceeded the estimate by economists of 155,000, according to FactSet, a provider of financial data. Other economist estimates were even lower.

It was the most jobs created since April of last year, when 251,000 jobs were created. Before last spring, the last month with stronger hiring, excluding temporary hiring for the census, was March 2006 - almost two years before the Great Recession.

Hiring was stronger in November and December by 60,000 jobs than first estimated. It was also stronger over the past two years than previously thought. The economy added 1.82 million jobs last year, nearly twice as many as in 2010.

The unemployment rate came down two notches from the 8.5 percent in December. It was also the fifth consecutive month the rate has fallen, the first time that has happened since late 1994.

The household survey had more encouraging news: 631,000 people said they found work in January. That pushed the number of unemployed down to 12.8 million, the fewest in three years.

And a quarter-million people streamed back into the work force and started looking for jobs. Because people are counted as unemployed only if they are looking for work, that makes the drop in the unemployment rate all the more impressive.

Economists said it was probably less likely that the Federal Reserve would take additional steps to help the economy anytime soon, as some investors have expected. The Fed has already held interest rates near zero for three years and bought almost $2 trillion in government bonds and other securities to keep long-term rates low.

Fed Chairman Ben Bernanke said last week that the central bank planned to keep rates near zero at least until late 2014. But if the unemployment rate keeps coming down, that date could be moved up, several economists said.

In Arlington, Va., Obama pointed out that the economy had added 3.7 million private sector jobs over the past 23 months. He acknowledged there were still too many Americans out of work, or working only part-time.

"But the economy is growing stronger," Obama said. "The recovery is speeding up. We've got to do everything in our power to keep it going. We can't go back to the policies that led to the recession, and we can't let Washington stand in the way of the recovery."

The president called on congressional Republicans to extend a 2-percentage-point cut in the Social Security payroll tax. The cut, put in place at the beginning of 2011, will expire Feb. 29 unless Congress acts.

Eleven million people are either working part-time but would prefer full-time work, or have stopped searching for jobs. When those people are added to the 12.8 million unemployed, nearly 24 million are considered "underemployed." The so-called "underemployment" rate edged down in January to 15.1 percent, from 15.2 percent.

Employers have added an average of 201,000 jobs a month in the past three months. That's 50,000 more jobs per month than the economy averaged in each month last year.

The Labor Department's January jobs report was filled with other encouraging data and revisions. The economy added 200,000 more jobs in 2011 than first thought.

The unemployment rate is nearly a percentage point lower than over the summer, when many feared a recession was imminent.

Impressively, the job gains last month were spread across the economy. Even the beleaguered construction sector added 21,000 jobs, its second month of strong gains. That figure has probably been helped by unseasonably warm weather this winter.

Even with the gains, the job market faces a long way back to full health. The nation has about 5.6 million fewer jobs than it did when the recession began in late 2007.

There was other good economic news Friday. A private trade group said U.S. service companies, including retailers, hotels and restaurants, expanded at the fastest pace in nearly a year in January. The survey's employment index soared to its highest level in nearly six years.

Another report showed that factory orders rose in December by 1.1 percent, driven higher by big increases in spending on industrial machinery and autos.

They follow several reports signaled this week that the economy is steadily improving. Manufacturers expanded at the fastest pace in seven months in January, a private survey showed.

And fewer people sought unemployment benefits last week, the Labor Department said. The four-week average of applications fell to its second-lowest level since June 2008. The drop shows that companies are cutting fewer jobs, which usually leads to more hiring.

Americans spent more at big chain retail stores last month compared with a year earlier. And automakers began 2012 with a strong sales gain in January. Healthier auto sales can boost a range of companies, from steel makers to parts suppliers to shippers.

Some analysts are getting more optimistic about growth this year. Jennifer Lee, an economist at BMO Capital Markets, says she now expects the economy to expand at a 2.5 percent annual pace in the first quarter, up from an earlier estimate of 2 percent.

The economy expanded at a 2.8 percent annual pace in the October-December quarter, a full percentage point higher than in the previous quarter.

Growth could still slow later this year. Much of the fourth quarter's expansion was due to companies ordering more goods to restock their warehouses. Restocking is likely to slow in the first three months of this year. That would drag on growth.

Europe's financial crisis could also slow demand for U.S. goods. And average wages failed to keep up with inflation last year. That leaves consumers with less spending power, which can hamper growth.