Tired and Broke, Santorum Heads Home to Do Taxes 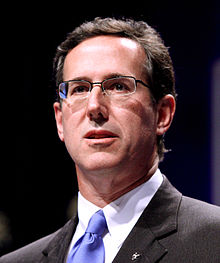 The former Pennsylvania senator is taking a pause from Florida campaigning just days before the Tuesday primary that even he expects to deal him a third consecutive loss.

Santorum says he would rather spend his Saturday sitting at his kitchen table doing his taxes than campaigning in a state where the race for the Republican presidential nomination has become a two-man fight between Newt Gingrich and Mitt Romney.

The cash-strapped candidate acknowledges that he simply can't keep up with the GOP front-runners in Florida.

"We're going to talk about the Constitution and talk about being a strong conservative," Santorum said at an event here this week. "And that's all we can do."

Outside advisers are urging him to pack up in Florida completely and not spend another minute in a state where he is cruising toward a loss. But Santorum insisted on Friday that he would return once he has readied his taxes for public release.

"I'm coming back within 24 hours, and I'm here through up to election day," Santorum told Fox News. "I've spent every minute here in Florida, and I'm going to work in Florida."

Santorum has yet to announce his schedule for Florida's primary day. He says it was a mistake for him to remain in South Carolina on its voting day.

"We can't let grass grow," he told reporters Thursday. "South Carolina Election Day was sort of a wasted day for us."

He pledged to continue his campaign regardless of the Florida outcome.

It's a grim period for Santorum, who just three weeks ago was riding high on a strong finish in the Iowa caucuses; after first saying the result was a virtual tie with Romney, the Iowa GOP ultimately declared Santorum the winner. The victory was short-lived. He lost big in both New Hampshire and South Carolina.

He faced an uphill battle even before the race turned to Florida. He doesn't have the money to spend on television ads in Florida's expensive media markets. He couldn't compete with the thousands-strong crowds his rivals have been drawing. And he wasn't able to find a moment here that crystalized the rationale for his candidacy.

"Other candidates tell you they need your help," Santorum told Florida Republicans this week, almost pleading. "They're lying. I really need your help."

But help didn't come - at least in this state - for a candidate who is visibly exhausted and running on, at most, four hours of sleep each night.

So Santorum is going home to Pennsylvania, which he represented in the Senate, and Virginia, where he lives with his wife and seven children, to get some rest and, he says, prepare his own taxes. He also plans fundraisers in both states as he works to rebuild his campaign account to pay for upcoming contests in Missouri, Minnesota and Colorado.

Santorum also is looking at Arizona and Michigan, states that vote at the end of February - if he makes it that far.

His inner circle of advisers is looking at the campaign checkbook. They say they can keep a lean campaign rolling in case Gingrich or Romney implode.

"This race is just starting. It's a three-man race," Santorum insists. "We're going to be in this race for the long term."

For now, at least, polls show Santorum dramatically trailing in Florida, the largest and most diverse state in the early nominating schedule. And he seems to be coming up short as he tries to win over voters with his everyman persona.

"I wish he had a little more passion in the belly," said Don Waldt, a Punta Gorda retiree who attended a Santorum rally at dusk this week. "He is conservative and authentic. But he isn't on top and doesn't seem to have a clear path to the top."