Hispanics in Focus As GOP Race Intensifies in Florida 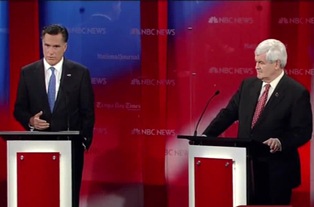 DORAL, Fla. (AP) -- Republican presidential candidate Newt Gingrich is calling for a measured approach to revising the nation's immigration laws, saying "too many enemies" stand in the way of sweeping change.

Gingrich spoke Friday at a conference of influential Hispanic leaders meeting near Miami.

Immigration is a major flashpoint issue among the GOP presidential candidates in Florida. They are trying to strike a balance between sounding compassionate yet firm about stemming the tide of illegal immigration.

More than a million Hispanic voters are the prize as Republican presidential rivals Mitt Romney and Newt Gingrich campaign hard in Florida after a feisty, final debate that served to heighten political tensions with the state's GOP primary just days away.

Romney was the aggressor Thursday night in the second debate in four days, pressing Gingrich to apologize for an ad labeling him as anti-immigrant and calling the idea "repulsive."

Both men arranged for appearances Friday in Miami with the Hispanic Leadership Network. The state has roughly 1.5 million Hispanic voters, who figure to play prominently in next Tuesday's Florida primary.

Immigration sparked the first clash Thursday night, moments after the debate opened, when Gingrich responded to a question by saying Romney was the most anti-immigrant of all four contenders on stage. "That's simply inexcusable," the former Massachusetts governor responded.

Gingrich fired back that Romney misled voters by running an ad accusing the former House speaker of once referring to Spanish as "the language of the ghetto." Gingrich said he was referring to a multitude of languages, not just Spanish.

Romney initially said of the ad, "I doubt it's mine," but moderator Wolf Blitzer pointed out that Romney, at the ad's conclusion, says he approved the message.

Gingrich rushed out an ad using debate footage that raised questions about Romney's credibility, including his reluctance to own up to the "ghetto" commercial. "If we can't trust Romney in a debate, how can we trust him in the White House," a narrator says in the Gingrich ad.

The debate was the 19th since the race for the Republican nomination began last year, and came five days before the Florida primary. Opinion polls show a close race, with a slight advantage for Romney and two other contenders, former Sen. Rick Santorum of Pennsylvania and Texas Rep. Ron Paul, far behind.

Paul has already made clear his intention to skip Florida in favor of smaller, less-expensive states. And Santorum, who had been campaigning aggressively here, conceded that he's better off sitting at his own kitchen table Saturday doing his taxes instead of campaigning in a state where he simply can't keep up with the GOP front-runners.

Outside advisers are urging him to pack up in Florida completely and not spend another minute in a state where he is cruising toward a loss.

The cash-strapped Santorum said he'll make a handful of Florida campaign stops early in the day, but will finish Friday with his family in Pennsylvania, where he'll spend all day Saturday before returning to Florida.

He drew applause when he called on the front-runners to stop attacking one another. "Can we set aside that Newt was a member of Congress ... and that Mitt Romney is a wealthy guy?" he said in a tone of exasperation.

On Friday, Santorum said the finger-pointing between the two leaders is obscuring how similar both are to President Barack Obama on issues such as health care - and making it harder to tell voters about his more conservative views.

"There are important issues in this race," Santorum told Fox News. "How people made money, all legitimately in my mind, should have nothing to do with it."

In the days since Romney's loss in South Carolina, Romney has tried to seize the initiative, playing the aggressor in the Tampa debate and assailing Gingrich in campaign speeches and a TV commercial. An outside group formed to support Romney has spent more than his own campaign's millions on ads, some of them designed to stop Gingrich's campaign momentum before it is too late to deny him the nomination.

With polls suggesting his South Carolina surge is stalling, Gingrich unleashed a particularly strong attack earlier in the day, much as he lashed out in Iowa when he rose in the polls, only to be knocked back by an onslaught of ads he was unable to counter effectively.

But he struggled to find an effective attack in the debate and was more often on the defensive.

Romney pounced when the topic turned to Gingrich's proposal for a permanent American colony on the moon - an issue of particular interest to engineers and others who live on Florida's famed Space Coast.

A career businessman before he became a politician, Romney said: "If I had a business executive come to me and say I want to spend a few hundred billion dollars to put a colony on the moon, I'd say, `You're fired.'"

Gingrich tried to raise questions about Romney's wealth and his investments. "I don't know of any American president who's had a Swiss bank account," Gingrich said.

Romney replied that his investments were in a blind trust over which he had no control. "There's nothing wrong with that," declared Romney, who has estimated his wealth at as much as $250 million.