The election year proposal was also a political appeal to young people and working families, two important voting blocs for Obama. But the initiative faces long odds in Congress, which must approve nearly all aspects of the president's plan.

Speaking to students at the University of Michigan, Obama said he was "putting colleges on notice" that the era of unabated tuition hikes is over.

"You can't assume that you'll just jack up tuition every single year. If you can't stop tuition from going up, then the funding you get from taxpayers each year will go down," Obama said on the final stop of a three-day post-State of the Union trip to promote components of his economic agenda.

Obama told the largely supportive student audience that the nation's economic future depended on making sure every American can afford a world-class education.

"In the coming decade, 60 percent of new jobs will require more than a high school diploma," he said. "Higher education is not a luxury. It's an economic imperative that every family in America should be able to afford."

The president first announced the outlines of the financial aid proposal during Tuesday's State of the Union address. His plan targets what is known as "campus based" aid given to colleges to distribute in areas such as Perkins loans or in work study programs. Of the $142 billion in federal grants and loans distributed in the last school year, about $3 billion went to these programs. His plan calls for increasing that type of aid to $10 billion annually. 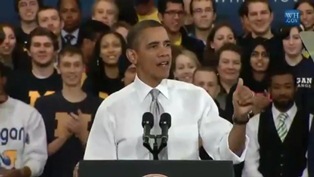 He also wants to create a "Race to the Top" competition in higher education similar to the one his administration used on K-12 to encourage states to better use higher education dollars in exchange for $1 billion in prize dollars. A second competition called "First in the World" would encourage innovation to boost productivity on campuses.

Obama is also pushing for the creation of new tools to allow students to determine which colleges and universities have the best value.

Some in the higher education community are nervous that the Obama administration could be setting a new precedent in the federal government's role in controlling the rising costs of college. Following the speech, Molly Corbett Broad, president of the American Council on Education, issued a statement saying there's concern that the proposal would "move decision-making in higher education from college campuses to Washington, D.C."

Sen. Lamar Alexander, R-Tenn., a former education secretary, said the autonomy of U.S. higher education is what makes it the best in the world, and he's questioned whether Obama can enforce any plan that shifts federal aid away from colleges and universities without hurting students.

"It's hard to do without hurting students, and it's not appropriate to do," Alexander said. "The federal government has no business doing this."

But Obama education secretary, Arne Duncan, said Friday that institutions of higher learning should get federal dollars based in part on their performance.

Rep. George Miller, D-Calif., the ranking member of the House Education and Workforce Committee, said there is bipartisan concern in Congress about the rising costs of college, and he's hopeful the president's plan will open up a dialogue about the problem. Some Republicans in the past, including Rep. Buck McKeon, R-Calif., have offered proposals similar to the president's.

The administration has already taken a series of steps to expand the availability of grants and loans and to make loans easier to pay back. During the State of the Union, Obama spelled out other proposals to make college more affordable, such as extending a tuition tax break and asking Congress to keep loan interest rates from doubling in July.

His administration has also targeted career college programs - primarily at for-profit institutions - with high loan default rates among graduates over multiple years by taking away their ability to participate in such programs.

But until now, the administration has done little to turn its attention to the rising cost of tuition at traditional colleges and universities.

The average in-state tuition and fees at four-year public colleges last fall rose 8.3 percent and, with room and board, now exceed $17,000 a year, according to the College Board. Rising tuition costs have been blamed on a variety of factors, including a decline in state dollars, an over-reliance on federal student loan dollars and competition for the best facilities and professors.