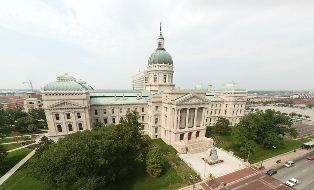 INDIANAPOLIS (AP) -- In the end, they just didn't have the votes.

For two legislative sessions, Indiana Democrats fought the divisive labor measure known as right-to-work. They offered amendments aimed at changing the bill. They sought to put the issue before voters in a referendum. And in their most high-profile gambit, House Democrats staged occasional boycotts to deny the Republican-dominated chamber enough members to conduct business.

But that all ended Wednesday when the minority party acceded to the mathematical reality of the Republican's 60-40 majority in the chamber. Democrats showed up, and the Indiana House voted 54-44 to make Indiana the 23rd right-to-work state.

It is the latest successful legislative push targeting union power following a Republican sweep of statehouses in 2010, and if Gov. Mitch Daniels signs the bill as expected it will make Indiana the first Rust Belt state to ban contracts that require workers to pay mandatory union fees for representation.

Highlighting his party's lack of power, House Minority Leader Patrick Bauer said Wednesday that his caucus' ability to stall the measure for even a few weeks itself constituted a success, of sorts.

"The fact that the Senate is going to have another week on this was probably undreamed of by (Republicans)," he said, referring to the likely timeline for passage in the Indiana Senate. "They never though that a full month would go by before they shoved this down the employees of the state's throats."

The measure faces little opposition in Indiana's Republican-controlled Senate and could reach Daniels' desk shortly before the Feb. 5 Super Bowl in Indianapolis.

"This announces, especially in the Rust Belt, that we are open for business here," Republican House Speaker Brian Bosma said.

Indiana is the latest Midwestern state where Republicans have pushed labor legislation with safe voting margins even as the efforts have drawn large protests by union backers and spawned recall efforts.

Wisconsin and Ohio last year passed laws stripping most public sector unions of collective bargaining rights. In both states, the laws provoked a firestorm. Wisconsin Democrats staged a similar, and similarly unsuccessful, boycott of their chamber for a time but also lacked the votes to ultimately kill the measure. Its passage sparked a backlash and the ongoing efforts to recall GOP Gov. Scott Walker and several Republican legislators. In Ohio, the law was handily repealed in November by voters in a referendum, a stinging defeat for GOP Gov. John Kasich and his Republican allies.

In Indiana, it's unclear whether Wednesday's vote marks the end of the controversy or a new phase.

But without the votes, Democratic opponents and a handful of Republicans who crossed party lines to oppose the measure, were left only to deliver emotional pleas to block it.

Democratic Rep. Linda Lawson called the Republican measure an attack on the union strongholds throughout the state.

"What you are doing is destroying my community!" said Lawson, who represents a northwest Indiana district packed with heavy manufacturers and a major BP oil refinery.

"What if I came into your community and said `No more cows' and `No more pigs?'" she said, referring to the agriculturally heavy districts represented by many of the Republicans who supported the bill.

Indiana would mark the first win in 10 years for national right-to-work advocates who have pushed unsuccessfully for the measure in other states. But few right-to-work states boast Indiana's union clout, borne of a long manufacturing legacy.

Oklahoma passed right-to-work legislation in 2001 but has a rural-based economy that produces comparatively fewer union jobs than Indiana.

Teamsters President Jim Hoffa sounded resigned to the right-to-work measure's passage, in a statement released shortly after the vote, but promised a voter backlash like those seen in other Midwest states.

"I have little doubt in my mind that Gov. Daniels and Indiana's Republican members of the state House and Senate will see a tremendous backlash from their constituents if right-to-work is passed," Hoffa said. "If there's one thing that we have seen this past year, it's that working men and women will rise up to challenge any legislation that threatens the welfare of their families."

Tom LoBianco can be reached at http://www.twitter.com/tomlobianco