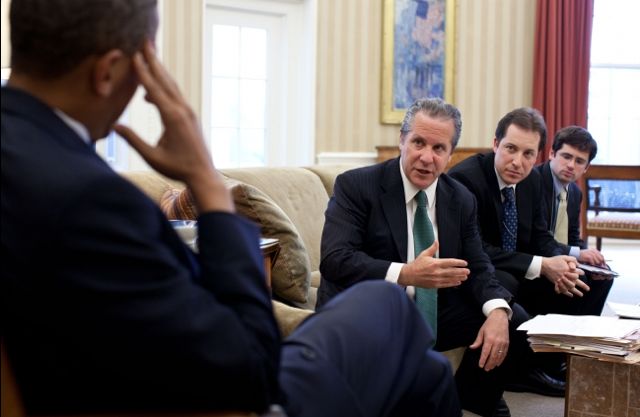 As Congress returns from a three-week holiday break, those are a few of the ideas for how to pay for extending an average $20-a-week Social Security payroll tax cut through the end of 2012 without adding to the government's long-term debt.

Obama and fellow Democrats insisted on taxing the wealthy to offset the deficit impact of the payroll tax cut and of providing jobless benefits to the long-term unemployed. While still useful as campaign fodder, that idea is largely a bygone one.

House and Senate negotiators are drawing on Obama's budget and the work of the defunct congressional supercommittee on deficit reduction to come up with the $160 billion or so needed to continue the tax cut and federal jobless benefits. Both of are set to expire Feb. 29.

Republicans controlling the House took a political drubbing in a December battle that produced a two-month extension of unemployment aid and the 2 percentage point tax cut for 160 million workers.

While House Republicans went after Democratic sacred cows such as federal worker benefits and health care spending, leading senators made progress on a bigger deal before it collapsed because of a lack of time, aides in both parties say.

Health care remains part of the equation. To prevent a 27 percent cut in Medicare payments to doctors under an outdated 1997 formula, negotiators are trying to find $39 billion in cuts elsewhere in health care spending. That would fix the problem for two years.

Some of the money being considered to offset the lost payroll tax revenue is practically free. For example, auctioning portions of the electromagnetic spectrum to wireless companies. That would raise perhaps $16 billion over the coming decade.

One idea seen as likely to make it into the final package is the repeal of a tax break taken by businesses that buy corporate jets. It would raise about $5 billion over a decade.

Other ideas illustrate the uneasy trade-off of big spending cuts or new fees stretched out over a decade to finance only 10 months of a temporary tax cut.

For instance, eliminating Saturday mail delivery and other Postal Service changes raise enough money to pay for only about two months of the payroll tax cut. That may seem like a bad deal for many Americans, especially retired people who don't get the tax cut. The postal reform plan was proposed by Obama and embraced by the supercommittee, but so far has been left out of the payroll tax legislation.

Similarly, an Obama plan to double the Transportation Security Administration's security fee for nonstop air travel from $5 to $10 a round-trip ticket - a sure bet to anger travelers - would raise only enough money to pay for about one month of the tax cut. It gained currency in supercommittee deliberations but is not being pressed now, according to aides in both parties.

"This is definitely a situation in which there's a lot of pain for not that much gain and that trying to do a lot of these things absent a big, broader budget deal is going to be difficult to do," said Ed Lorenzen, an analyst with the Committee for a Responsible Federal Budget, a Washington-based group that advocates fiscal discipline. "Nickel and diming savings is not easy."

A new $100 per flight fee on airlines and owners of private jets that would bring in more than $1 billion a year seems to be gaining momentum. So is a proposal to raise billions of dollars by making businesses with underfunded defined benefit pension plans pay higher premiums to the Pension Benefit Guaranty Corporation, which insures such plans. Many businesses and their GOP allies in Washington are resisting the proposals.

Democrats appear set to fight moves by House Republicans to require federal civilian workers to contribute 1.5 percent more of their salaries toward their pensions and absorb a third straight annual pay freeze. Obama wants to give federal workers a one-half of 1 percent pay increase in 2013.

Republicans' proposal to trim the federal workforce through retirements and attrition faces opposition from Democrats who supported it as part of a big deficit-cutting package. Politically wrenching changes to Medicare appear to be off the table.

"When you're talking about a major $1.2 trillion or more deficit reduction plan, there are some things you're willing to consider that you might not in the context of a much smaller agreement," said one Democratic negotiator, Rep. Chris Van Hollen of Maryland.

Despite powerful opposition from the Democratic-leaning Hispanic community, Republicans appear likely to win a provision that would save at least $9 billion by blocking illegal immigrants from claiming the refundable child tax credit. A separate proposal would raise billions of dollars by imposing Social Security taxes on some foreign temporary workers now exempt from them.

Lawmakers already have snapped up $36 billion in projected receipts over the coming decade to finance the two-month jobless benefits and payroll tax extension enacted just before Christmas. The money comes from a 0.10 percentage point increase in home loan guarantee fees charged by mortgage giants Fannie Mae and Freddie Mac that promises to increase the cost of a typical $200,000 mortgage by more than $5,000 over 30 years.

One thing Democrats are loathe to do is revisit the overall cap on day-to-day agency budgets set under last summer's budget and debt limit deal. That makes it more difficult to bank savings from cutting the federal workforce.

Republicans promise to try to make sure the package is funded more with real spending cuts than new fees or easy money such as spectrum auctions. But they don't seem to be spoiling for a fight.

"Given the work that has already been done, there is no reason this bill cannot be completed swiftly and with little acrimony," said Michael Steel, a spokesman for House Speaker John Boehner, R-Ohio. "Frankly, the only way this process will not go smoothly and through regular order is if the White House chooses to disrupt it for political reasons."