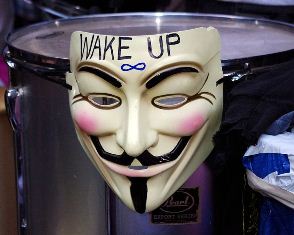 NEW YORK (AP) -- It was only a few nights after the Occupy protesters began sleeping in his church sanctuary when the Rev. Bob Brashear realized that his laptop was missing.

The refugees from Manhattan's Zuccotti Park had found their way to his cavernous Presbyterian church on a cold winter evening, hoping to stay for a few nights, maybe longer. It was the latest stopover for the nomadic group, which has been living in a rotating series of churches since the city shut down its camp in November.

"There was a sense of shock and sadness that it had happened," said Brashear, whose laptop will soon be replaced by Occupy organizers. "And there's a common understanding that if there's one more theft in the church, that's it."

This is what the Occupy encampment has become: a band of homeless protesters with no place to go. Amid accusations of drug use and sporadic theft, they've been sleeping on church pews for weeks, consuming at least $20,000 of the donations that Occupy Wall Street still has in its coffers. Their existence is being hotly debated at Occupy meetings: Are these people truly "Occupiers" who deserve free food and a roof over their heads?

"We don't do this out of charity," said 34-year-old Ravi Ahmad, who works for Columbia University and volunteers with Occupy in her spare time. "We do this so that whoever wants to work in the movement can work in the movement. This is a meritocracy."

But money is draining rapidly from Occupy's various bank accounts, which currently amount to about $344,000. Including church maintenance costs and meals, living expenses are more than $2,000 per week.

"We are all aware that the NYPD destroyed the tent homes of many Occupiers in just one night," someone recently wrote on http://www.nycga.net , Occupy's General Assembly website for New York City. "However, where were they living before Zuccotti Park? Are we paying for housing for homeless people who may be relocated to City shelters?"

The movement, which denounces corporate excess and economic inequality, has been fighting to stay afloat in the city where it began. Media attention and donations have dropped off. And although protesters regularly meet to plan demonstrations, recent marches have had none of the spectacle that captivated New Yorkers and watchers worldwide.

On Monday, the metal barricades surrounding Zuccotti Park were removed for the first time since the November raid. But protesters still can't set up tents to camp overnight - and they don't have a long-term solution to the housing problem.


Their current home is Brashear's West-Park Presbyterian Church, a stately 100-year-old house of worship on the Upper West Side that badly needs renovation. Occupy organizers see the cracks in the ceiling as an opportunity to repay the favor by helping to fix the place up.

There are about 70 Occupiers staying there and another 30 or so at Park Slope United Methodist Church in Brooklyn.

"Everybody tries to get along, make things work," said Donna Marinelli, 52, of New Britain, Conn., who was sitting on the floor in a sleeping bag alongside her cousin, David Monarca. "We were in the park in tents until they raided us. We wanted to stay for the movement. We didn't want to leave when we just got here."

During the daylight hours, Marinelli attends Occupy events and volunteers at an Occupy kitchen in Brooklyn. Nobody is allowed to stay in the church during the day. At night, the place is patrolled by an Occupy security team led by Marine Corps Sgt. Halo Showzah, a 27-year-old Iraq war veteran from the Bronx.

"We walk around the church with flashlights, making noise to wake these people up and making sure they're good," he said. "No sex in the church, no drinking, no smoking, no shooting, no sniffing."

The church was quiet and cozy Wednesday night as about two dozen people staked out their respective corners of the room. Some prefer the balcony; others like to curl up by the door. Someone fiddled around on the piano and sang a few songs as a cat watched from a pew. Showzah wandered around and chatted with everyone, making jokes and doling out advice to the singer.

The security threat is very real here. At least 30 percent of the crowd is a mix of chronically homeless, drug-addicted people, some of whom suffer from "psychological issues," as several protesters put it. Among other rules, the pastor has demanded that the Occupiers station at least one mental health expert "within easy reach" of the church every night.

Even some of the church dwellers themselves are fed up with their fellow pew mates. Chris Allen, 36, is working on a backup plan in case they get kicked out.

"I feel people are messing up the church and we're not going to have it much longer, so I'm worried about putting money in my pocket," said Allen, an unemployed construction worker from Long Island who lives here with his wife. "Because when it snows and I have nowhere to go, I'm not going to be stuck on the streets like everyone else for being idiots."

Who is allowed to stay at the church is a source of contention and perpetual infighting. If you're not on the official list kept by Occupy organizers, you're not allowed inside. But it's unclear what distinguishes the general populace from an Occupier.

One night in December, police officers were called to the Church of St. Paul and St. Andrew when people who weren't on the list came to the door and refused to leave.

"I was turned away one night in the cold and rain," said David Everitt-Carlson, a 55-year-old unemployed former advertising executive who lived in a teepee at Zuccotti Park. "And I slept at Grand Central Station. I found a place behind a Christmas decoration."

About a month ago, a telephone hotline was set up so people could call and request a spot at one of the churches. But space is limited. And each church sojourn has an expiration date.

Some churches willingly opened their doors to provide temporary shelter after the police raid. None of them are equipped to house protesters forever.

"It's a lot of wear and tear on the space," said Michael Ellick, a minister at Judson Memorial Church, which housed protesters for several nights in November. "We're broke, so we don't have a custodial staff. We can't be a full-time housing unit."

During daylight hours, some people migrate down to Occupy's atrium at 60 Wall St., while others head off to hunt for jobs or disappear into the city. At night, there are often counselors on hand for emotional support.

Typical arguments are reminiscent of life at Zuccotti, which had its own share of criminal activity. A frequent complaint, for example, involves a man who apparently never takes showers.

"No fistfights, no weapons involved," said Jeff Brewer, 34, an Occupy organizer. "I believe there was a shampoo bottle that was thrown one time."

Meals are donations from food pantries and leftovers dropped off by nearby restaurants.

The debate over providing food and shelter for the church Occupiers plays into a larger one that has divided New York's protesters ever since the police raid. While some are determined to occupy another space somewhere in the city, others say an encampment is unnecessary and, at its worst, a burden.

The church dwellers believe they are carrying the torch for the lost encampment - and that, someday, they will form the foundation of a new one.

"We really have been calling it the `Occupiers army' that we are building," explained protester Jason Harris, a teacher from Massachusetts.

First, though, they'll have to find a way to survive the winter. Brashear hasn't yet decided whether he will allow the protesters to stay at West-Park beyond next week. If they are truly dedicated to forming a community - and not simply seeking shelter within the church's walls - he'll be more willing to extend their unspoken lease.

"It's a sort of sink or swim situation," he said. "I think, long-term, they have to make a decision about what, exactly, their movement is about."