BILLINGS, Mont. (AP) -- A dog that was feared dead after he was swept away in a weekend avalanche that killed his owner showed up four days later at the Montana motel where his owners had stayed the night before going backcountry skiing.

Search and rescue team member Bill Whittle said he was "positive" that the Welsh corgi - named Ole - had been buried in Saturday's avalanche.

"The avalanche guys were up there on Monday investigating and they were looking for the dog too and never seen any signs," he said.

But on Wednesday, Ole showed up exhausted and hungry back at the motel, four miles from where the slide occurred, the Billings Gazette (http://bit.ly/zNaSeK ) reported.

"When I first saw the dog, it was sitting in front of their room staring at the door," Cooke City Alpine Motel owner Robert Weinstein said in an email to The Associated Press on Thursday.

Dave Gaillard of Bozeman was skiing with his wife when the avalanche struck near Cooke City, an old mining town just outside Yellowstone National Park.

"His last words to me were, `Retreat to the trees.' I think he saw what was coming from above, that I did not see," Kerry Corcoran Gaillard told the Bozeman Daily Chronicle.

Gaillard's daughter, 11-year-old Marguerite, was putting photos of Ole on poster board as a memorial Wednesday afternoon. 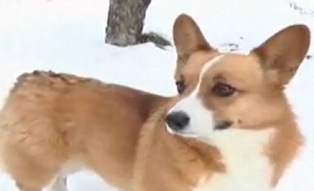 "She found out when she was halfway done with that that Ole was still alive," said Gaillard's step-daughter, Silver Brelsford.

Whittle drove the dog back to the family in Bozeman.

"We needed this," Whittle said of Ole's survival. "It kind of cheered everyone up."

Searchers recovered Gaillard's body earlier this week. Family members were preparing for his funeral on Friday.